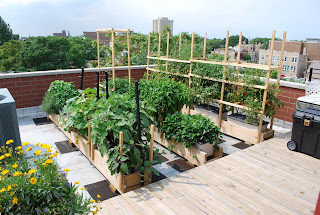 Since I’ve started my garden, many people have asked, why are you doing this? There are farmer’s markets, CSAs, independent and chain grocers at your disposal, why did you choose to grow your own vegetables, let alone, research on how to grow them on your rooftop?

I’ve thought about this quite a bit. At first, my response, was, “what’s it matter to you what I do or why I do it?” Then it evolved to: “why wouldn’t I do it, doesn’t it just makes sense?”

The more I think about it the more I feel that there was this idea of relearning about food - where it comes from, how it grows, and how to grow it. Then I started thinking about how can I, a Chicagoan with zero farmable land, grow my own food? Now, I find myself thinking about how to extend the seasons here in Chicago, the best times to rotate plants, where to procure my materials, and how to spread the word.

It’s a “back to basics” thing for me. Why do I do it? Simply, because I can. You can too and it’s not only good for you, it can potentially be good for your community, your environment and other communities and environments around the world. That’s the bigger picture.

Seem lofty? Sure it does but if you think about it, it’s pretty simple. It’s the old, “give a man a fish he eats for a day, teach a man to fish…” If you learn to grow food for you and your family, and then share the knowledge with other families in your community or around the world, you can change the lives of other people. One organization that is linking this knowledge with technology is The Growing Connection. They aim to engage “people – a network of committed individuals - in an elegant solution to one of man’s fundamental challenges.”

“The Growing Connection (TGC) is a grassroots project developed by the Food and Agriculture Organization of the United Nations (FAO) supported by a progressive coalition of private and public sector partners.” They see the opportunity to use the recent agricultural technology, also known as SIPs (or Earthboxes, in this case) as the medium to grow vegetables in poor economic or climate conditions. Then, they use the knowledge gained to bridge communities and countries together via the internet. It’s people sharing their experience with other people for a greater good. You can view a video here.

One thing that struck me is how they gather people from the academic setting, neighborhood children, and technology professionals together for this cause. Teaching children and communicating in our information age, has all come together. The bigger picture is starting to become clear. 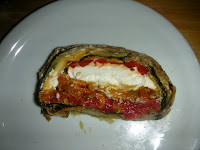 Made of grilled vegetables, goat cheese, and vinaigrette, it's an elegant way to use what you've grown. And tastes even better than it looks.

If you've never made a terrine, this is a good place for a home cook with, say, intermediate kitchen skills to start. It uses late summer vegetables, ones that your SIPs are starting to deliver. It's also a very flexible recipe. The basic technique can be used with several different combinations of vegetables.

Before I get to the terrine, I'd like to point out that there are countless recipes, and sites devoted to them, that you could use to prepare your vegetables. With good ingredients, simple is better; a plate of sliced heirloom tomatoes drizzled with olive oil, sherry vinegar, basil, salt and pepper. Add a few slices of No-Knead Bread , some good cheese and a bottle of wine and it's a meal.

If you want some more ideas, I've found two of Mark Bittman's cookbooks to be helpful--Best Recipes in the World and How to Cook Everything - Vegetarian.

Adapted from Michael Ruhlman's Charcuterie and this recipe on Epicurious. 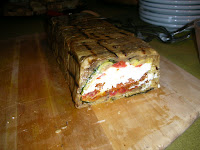 Olive oil to brush on the above prior to grilling, (or broiling)
Salt and pepper

2 or 3 sweet peppers, roasted, peeled, seeded, and cut into strips
4 or 5 oven dried tomatoes, (click here for more on this technique), or sun-dried tomatoes

A narrow terrine pan, 10"x3"x3". If you have a different size you'll need to adjust the quantity of your ingredients. Also, any mold wider than three inches might cause the finished product to sag in the middle.

Mandoline, optional but makes things a lot easier
Plastic wrap
Pastry brush
Piece of cardboard cut to fit the top of the terrine pan
2 one pound cans, used to weigh down the terrine while it sets overnight


It takes about an hour of prep time, plus it needs to chill overnight

Slice the first three vegetables as uniformly as you can, a mandoline works best. Brush with oil, season with salt and pepper. Grill over medium heat until tender, turning just once so you get nice grill marks. Transfer to a plate to cool.

Before you start putting the terrine together, taste each of the components. If you don't like anything, change it now. It won't magically improve after being refrigerated overnight in a mold.

Put the water in a saucepan and sprinkle the gelatin over it. Once the gelatin is absorbed (blooms), put the pan over low heat until it's dissolved. Add it to 1/4 cup of the vinaigrette and keep it warm so it doesn't start to set up while you assemble the terrine. Putting the cup of vinaigrette into a slightly larger bowl of warm water does the trick.

Line the terrine with plastic wrap. You want enough overhang, (about 3 inches, on the long sides) so you can fold it over on the top of the finished terrine. Wetting the inside of the mold before you put in the plastic will make the plastic stick in the corners. Put a layer of eggplant 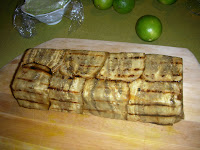 slices in the mold first. Put them in crosswise, with the end of each piece starting at the centerline of the bottom of the mold and running up, and over, the side by an inch or two.

Keep in mind that the first layer you put down is going to be the "top" of the finished terrine, so put the pieces down with very little overlap. And that you're going to be serving a cross section of whatever you put inside the mold.

Take it out of the fridge about a half hour before serving. Flip it over on to a cutting board, remove the plastic, turn it right side up (what was the bottom of the mold is the finished top of the terrine) and cut it into 1/2" slices. You'll get a clean slice if you use a thin bladed knife and pull it toward you with a long stroke rather than sawing back and forth. Clean off the knife in a tall glass of hot water as needed. Serve each piece with a little of the reserved vinaigrette on the side.

Try this recipe using different vegetables: carrots, mushrooms, leeks, onions, or fennel. Or boil, and shock in an ice water bath, some chard or kale to use as the outer layer instead of eggplant. You can play around with whatever combinations taste and look good. I wonder if I could make it a truly vegetarian dish by substituting agar for the gelatin? I bet someone at Ideas in Food or Playing with Fire and Water could tell me.

Rulhman's Charcuterie is discussed here on eGullet. Now that you're familiar with the basic technique, put it to use by making other terrines and patés.
Posted by Bruce at 6:49 PM 2 comments:

Labels: cooking, recipes, what to do with all the veg

Why We Grow in Sub Irrigated Planters (SIPs) 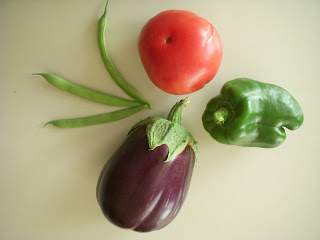 August 6 harvest
I could never grow this in my relatively large Chicago courtyard with composted soil.
There's no sun there. 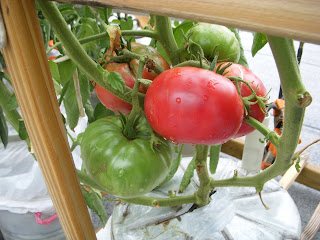 Up on the roof, tucked into a SIP
plants have everything they need:
sun, organic fertilizer, and water 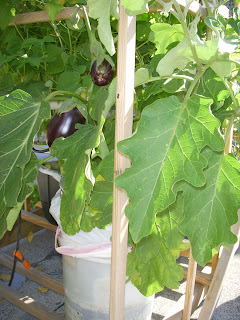 Not everything goes as expected. We lost three SIPs with black beauty eggplants due to nefarious factors still unidentified. But one recycled bucket planter keeps on producing. 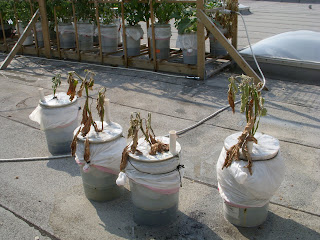 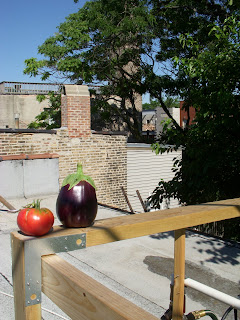 Back in May, neighbor Bruce and I went up to Gethesemane Garden Center in Chicago to get some plant starts. We ended up at the seed racks. I'm a sucker for watercolor depictions, and picked up these two. "Why not try melons?" Bruce asked. Why not indeed.

We direct-seeded the Renee's Garden Icebox Watermelon (rainbow sherbet colors, enough to make any gardener weak in the knees) and Botanical Interests Ha Ogen ("if you have room...for only one melon, Ha Ogen should be your first choice") into some of the yellow buckets in the new run of ten on the roof. My idea was that they'd crawl up and hang off the short trellis Art had built, but soon it was clear the Renee's watermelon plants wanted more attachments, more places to twine onto.

So Art installed a piece of the hard grid we got at an auction way back. And the melons liked it. Here's a fetal melon with its flowered hat intact. Is there a more charming fruit to grow?


Back to the structure. You can see from photos that these melon babies are just getting started.

It was time for dramatic measures. So Art installed a PVC arch, after which he decided we needed a second arch so they could be tied together for structural integrity. Here's Art screwing in the flagpole holder for the second arch. As of August 1, the melons are thriving. These are the Renee's watermelons, which like the hard grid. The Ha Ogen seem better at climbing the arch. We'll keep you updated. 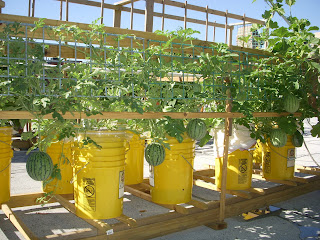