This time of year organic oranges are cheap. It's easy enough to use up the "good" part of the orange, but what to do with all that peel? 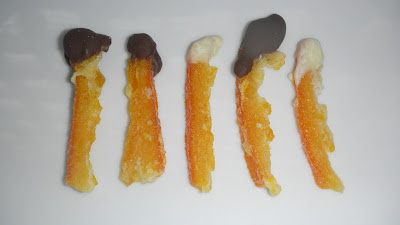 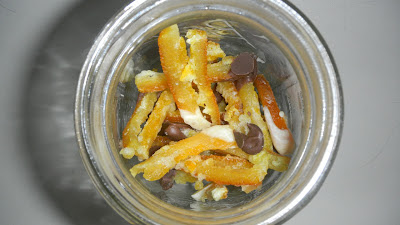 First you boil the julienned peels (which include the pith) in several changes of water.  The idea is to get rid of the bitterness, so taste after the third change and keep changing/boiling until it's gone. There shouldn't be any off flavors; it should just taste like a bitter orange. To get an idea of what you don't want, taste one after the first boil.


I use 1 part sugar and 1 part water in my simple syrup. I make enough to just cover the boiled peels, and cook at a low boil for 20 min or so in a sauce pot. The orange rinds will become slightly translucent, absorbing the sugar (?), and then they're done. Drain them in sieve and let cool a bit. If you put the final dusting of dry sugar on when they're too hot, you'll just have a gooey mess. Lay them out on wax paper to dry as per the recipe.


The final step is to dip them in melted chocolate.  Bitter is best, plenty of sugar in the peel at this point, though white chocolate is a nice twist. 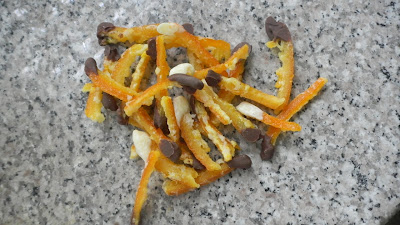 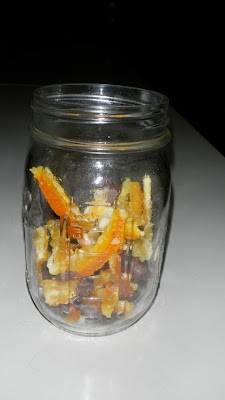 One use for the interior of the oranges is to make a simple salad.  Supreme, or section the oranges, removing all traces of membrane.  Toss with minced scallions, toasted walnuts, ground cumin, and cayenne.

I wrote about preserved and candied lemons a couple of years ago, linked here.
Posted by Bruce at 11:53 AM

These are spectacular, Bruce. That jar you delivered is now in the freezer, to put a door between temptation and us.