As late as June 26 the tomatoes in the larger SIPs looked robust. 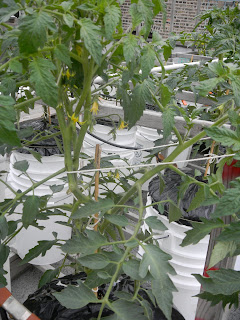 Because we planned to be away over the long 4th of July weekend, Art set up his excellent auto-watering system, a series of timers programmed for a daily fill of all our rooftop SIP reservoirs, including the large white ones, to overflowing. Ten days later, problems with the large-SIP tomatoes emerged.
Some yellowing on the Matina 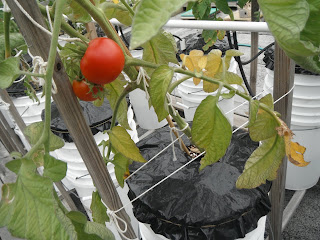 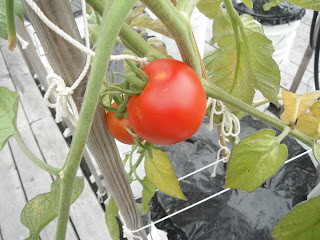 ...and other tomatoes in the large SIPs 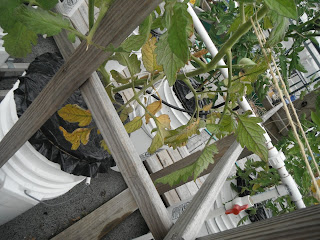 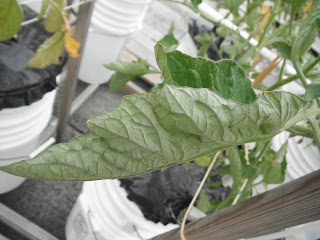 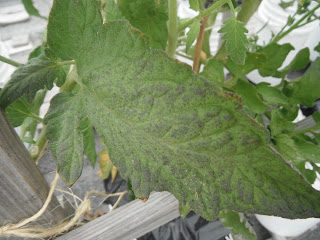 And then we began a week of 100+ temps, which means it was likely closer to 115 degrees F on the roof. This was around July 17. I put up some sheets to shade the large-SIP tomatoes, Art helpfully pointing out that the sun, lower in the sky now, would still blast them. 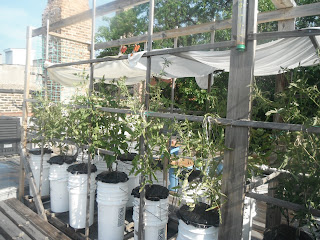 He created a better sun block from some brand-new, garbage-picked shades with tiny holes for air flow. One thing I knew for certain: the auto-watering system was a dream, keeping me from having to go to the roof even in the relatively cooler early morning hours to water. 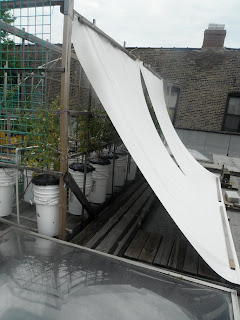 The tomatoes looked awful, not setting flowers and yellowing up even more. Beyond this, they just looked spindly and not right. 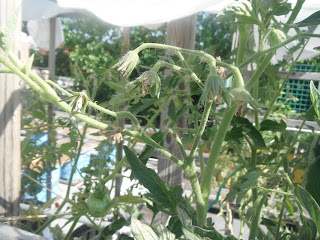 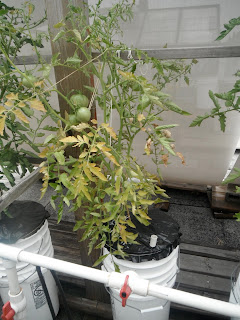 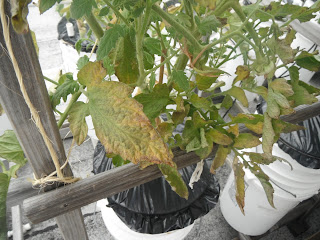 Pause for a quick historical note: I bleach-scrubbed all the SIPs this spring. Insult to injury, I blended brand new potting mix (peat and perlite) for the larger white tomato SIPs to avoid the risk of pathogens overwintering. And now the funk seemed only to affect those same white SIPs.
How do I know? Because a scant ten feet away, tomatoes planted in 5-gal yellow SIPs were holding their own and even thriving in the extreme heat. 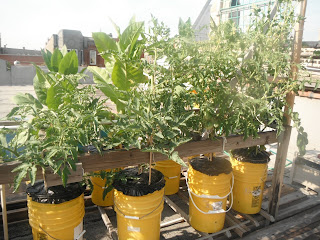 I had a thought, based on something I'd read over at Greenscaper Bob's blog Inside Urban Green over the years and also after checking online tomato problem photos. It's possible, of course, that we had a couple concurrent issues, but what about overwatering as a cause for the decline in the large-reservoir tomato SIPs? Bob says unequivocally that SIPs can be overwatered. Had we been drowning the plants in the larger SIPs by using the automatic watering system to fill their deep reservoirs to capacity every day?
We untied one of the tomatoes and Art lifted out the top bucket. Lots of roots, that's for sure, all of them sitting in water. 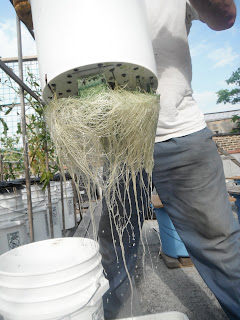 I siphoned the liquid out of every reservoir and began adding a measured amount of water to each of them every day, an enormously time-consuming job for someone used to automatic watering, I assure you. 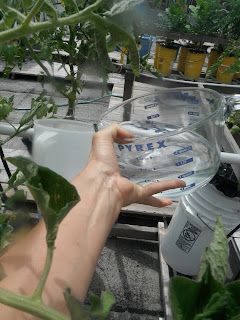 Then (duh) Art suggested drilling a hole lower down on the reservoir bucket. We could always plug it for next year if this experiment didn't work. 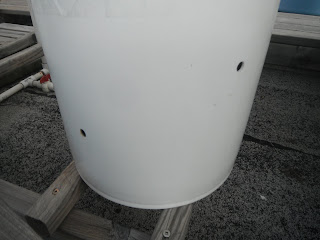 Added to all this...weirdly, not ALL of the large-reservoir SIP tomatoes were sickly. Here's a Valencia and the elegant Julia Child that seem OK. 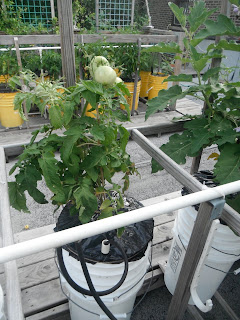 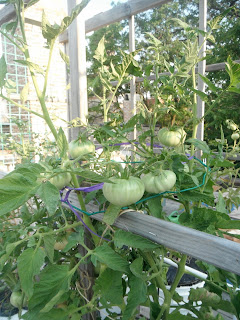 How lucky to have five tomatoes planted in 5-gal SIPs, not only as a control group in this unanticipated and haphazard experiment, but also for harvesting and enjoying. Here are some shots of them on July 31--Valencia, Cosmonaut Volkov, and Matina among them. 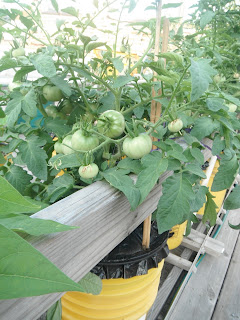 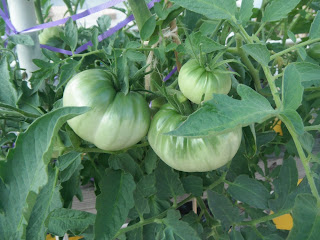 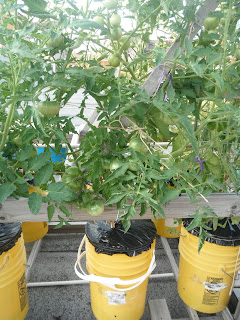 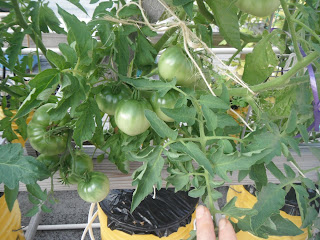 Art used some scrap lumber to build a nice strong support for them. We don't have one on this SIP run, because we use it mostly for lower growing greens and vegetables that don't require support. Because Bruce grew so many beautiful tomato starts, I couldn't resist planting a few extras. Happy I did. 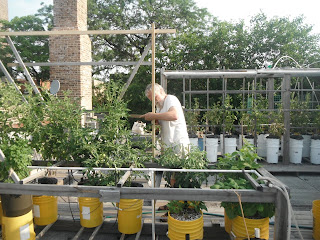 So how are the large SIPs doing with their smaller water reservoirs? Difficult to say. Because I'm an eternal optimist, I sometimes think I see a revival. This black cherry is producing, and appears a bit healthier at top. Same with the lovely small yellow tomato whose name is unknown to me (I hadn't realized I'd even planted a yellow tomato). 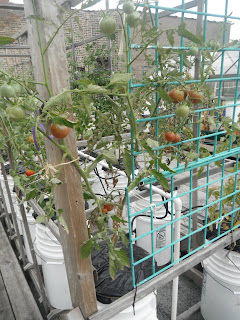 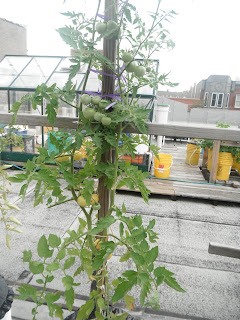 Thanks for reading the details of this tomato mystery. If you have thoughts on the situation, we'd be grateful to see them in comments. In the interim, we'll keep you posted.
Posted by H2 at 6:29 PM

The only problem we ever have out here is blight. From too much rain.

I like your theory. I remember someone once told me that tomatoes hate getting their feet wet.

Great detective work and analysis. We've certainly had some extreme weather in Chicago.

I am humbled to know that even with your 50+ years of gardening experience crop failure is still a possibility, I admire your optimistic attitude.

Thanks so much, each of you, for your thoughts. It's heartening to have a larger brain on this...

We've had blossom end rot on our San Marzano plum tomatoes while our black cherry cherries are doing fine. They are right next to each other in identical SIPs right off of Wicker Park. I added egg shells to the SM's but not sure if its working yet.

I had a conversation with an experienced gardener last night who said tomatoes like a drop in temperature at night which we haven't been getting due to the extreme heat and humidity. Not sure of the solution... but at least my basil plant is growing like crazy.

You're just a stone's throw away, Scott. Everything's growing nicely on your deck. BER happens to some tomatoes more than others--San Marzano esp for us (so I stopped growing them).

This must be the Summer of Basil--we keep pinching them back so they continue to produce leaves.

But the bees love basil flowers.

I'd just about kill for a cool night myself.

I love the extensive support given to tomato to stay upright for better growth and harvest. Our rooftop gardening with 800 chili plants need less support, but also a necessity against wind.

Your sea of chili plants is beautiful.