The Power of Compost 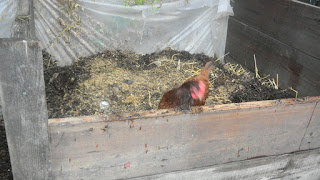 I'm really interested in the work of Jean Pain.

Let’s look at Jean Pain’s methods and try to assess what sort of legacy he has left us as we enter the 21st century.

Pain lived in Provence and realized the limitations of what Alan Savory has called “brittle environments,” those charac­terized by extended seasonal drought. Absent herds of large animals to process the biomass into a form available to soil organisms, organic matter tended to cycle more often through fire than through earth, exaggerating the loss of carbon from soils already depleted and subject to high temperatures for much of the year. While Savory, and his intellectual predecessor Frenchman Andre Voisin, emphasized intensive grazing by herd animals, Pain faced a dry mountainous landscape where resinous plants were dominant. Unsuitable for most grazing animals, the brush-wood, which amounted to as much as 50 ton / hectare (20 ton / acre) was a huge reservoir of volatile fuel for an ever-increasing number of human-caused fires scourging the Mediterranean littoral (seashore).

A modern Prometheus, Pain sought to domesticate this demon for human use. His studies had revealed the essential mystery of humus and its role in soil fertility. The creation of long-chain carbon molecules by a biological alchemy made soils and the environments based on them, more supple, better capable of holding magic substance could be “cultured” by providing supportive conditions for bacteria and fungi to digest plant material: ample mois­ture, controlled atmosphere and temperature and the continuous diffusion of oxygen into the mass were sufficient.

But though the raw material was abundant in the Provencal forests, its collection required chainsaws and motorized transport, and its processing required grinding to increase the surface area and hasten break­down. Collection and grinding required industrial fuels and machinery, albeit simple: trucks, tractors, power saws. How then to close this economic and energy loop? By capturing energy from the composting process.

I love how he took forest underbrush, and with the help of bacteria, made hot water, methane, electricity, and garden compost.  The man was a genius.

It's funny, but I love compost.

It is pretty amazing what you can do with compost. I recently read about one man in Canada who used compost to heat his outdoor worm bin in the harsh winters of Canada.