Just underway here in Wicker Park. Will it manifest the massive amounts the excitable weather people predict? If so, I'll be spending a lot of time on this currently dry sidewalk in days to come.
Stay tuned... 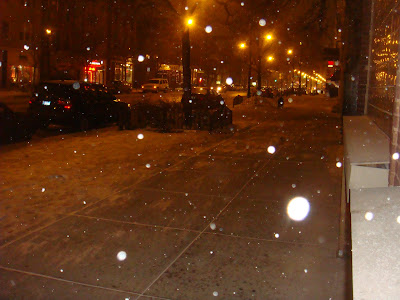 I link to these things for selfish reasons, having very little to do with rooftop gardening.  Aaron Bady, at zunguzungu, sums up my feelings:

I’ll have more words in the next day or so on the choices that are being taken, and on the words we’re using to make them meaningful. Always more words. But for now, I want to remind myself, publicly, that the closest thing to an honorable choice that American citizens like me have is to bear witness and solidarity to the incredibly thing that is happening right now, and to do so as humbly and reverently as we are able to do. The world is changing before us, and we will need new words to describe it if we are to be true to the best parts of ourselves, and if we are to be of any use to a world that we might still find a way to be of use to. We need to learn to listen more clearly. We have corrupted the words we were so proud of inheriting, words like “democracy,” and we need to be a lot better to learn the new words that are being coined right now, in places of which even our own ignorance is something of an unknown quantity to us, and in voices that speak, for example, in languages we don’t understand.

Mainly, I know, I need to be reverent right now, if only for myself.  I am under no illusions that it will do the people of Egypt any particular good for me to retweet links to articles and images and expressions of the righteous human spirit so gloriously on display in Egypt right now — much as I would like it to — but that’s not really why I’ve been doing it. It’s selfish. It is for me, because it’s what I need to do as a person whose spiritual body has gotten very hungry. I want to be a part of something hopeful because I find that too much hopelessness has crept too deeply into the person I have no choice but to be.

There's always some kind of indoor prep for the spring roof garden. Today it's 25 degrees in Chicago with enough snow to need shoveling, a good day to cut the "shower caps" that keep moisture from evaporating off the 58 two-bucket SIPs on our roof. 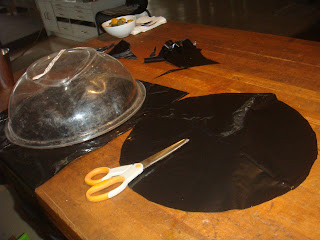 When May finally arrives, bringing temps in line with tomato-eggplant-squash-pepper planting, it's like the start of the Indy 500. So much to do you can't wait to get started. You don't want to be cutting out plastic circles when there's potting mix to be shoveled and young plant starts to get in.

Though we re-use the potting mix and SIPs themselves, I'm reluctant to the take the shower caps into another season. Sure, the plastic would last at least one summer. But with a fine underside coating of fertilizer residue and possible plant cooties (professional term), I elect to cut new discs each year.

We get 12 from a garbage bag using the large Olive Garden to-go bowl/cloche as a measure, scoring and then cutting.

Since you've patiently read through our indoor task for today, here's a picture of Good Dog Carl from earlier this week, Jan 25, 2011. 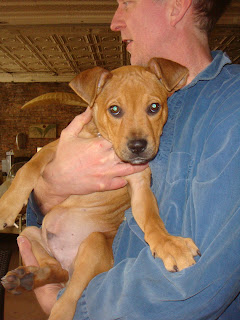 I don't do much on twitter besides throw up links, so I have no idea how useful a "chat" would be. But if you're into talking seeds on your computer, this, co-hosted by Chicago's own Mr. Brown Thumb, sounds interesting:

#SeedChat is a weekly discussion forum on Twitter where the participants discuss starting plants from seed, seed saving, heirloom plants grown from seed, saving and trading seeds. Twitter members can participate in #SeedChat by searching for and clicking on the #SeedChat hashtag on Twitter, or on Tweetchat, to follow along and reply to other members. #SeedChat is hosted by @xitomatl and @mrbrownthumb. There is also a dedicated Twitter account: @SeedChat that will lead the discussion every week. Join us every Wednesday at 8pmCentral/9pm Eastern to discuss seeds. Our schedule is located here.

The format for #SeedChat may be a little more structured than your average conversation on Twitter. You can submit a question ahead of time for a particular week's topic via the form below.

I love language, and seeds with names like Cosmonaut Volkov tomato get me every time.

The naming story varies by seed site, with Wikipedia saying Vladislav Volkov (center) and crew died when a Soyuz space capsule valve opened too soon upon re-entry in 1971, suffocating the crew.
Tomatofest describes the tomato thusly: Ukrainian heirloom named after the famous Russian cosmonaut who died while landing.
That's sad, but the tomato looks worthy and we'll be growing it this summer.

Other sites contain speculation that Cosmonaut Volkov seeds went into space but I'm not able to confirm.

More at Territorial Seed Company, whose tomato description plays off the "out of this word" angle and doesn't mention death of a cosmonaut at all.

If you have a favorite oddly named fruit or vegetable, send it along.
Posted by H2 at 8:41 AM No comments:

Labels: seeds I bought because I succumbed to the name

They are having their winter meeting at Garfield Park Conservatory Feb 2nd from 5:30 to 8pm.  It's a casual potluck and a terrific chance to meet like minded people in Chicago.

(Click on image for larger view)
Posted by Bruce at 11:00 AM No comments:

This looks provocative, productive, and fun. I want to try some version of it this spring.

A grey Chicago day, but I bounded out of bed and over to a pile of stuff I'd retrieved from the roof Sunday.

I ordered a boatload of seeds over the weekend (is there any potential greater than the gardener's imagination in January?) and promised myself as I loaded up on new varieties that I'd tend to all the seed we'd collected during 2010.

On the way to the roof I checked the greens growing on our chilly second floor...under shop lights and the sun from southern-exposure windows.

The seeds for these greens were started by Bruce in Feb 2010, growing into young plant starts that flourished in the early spring cool and feeding us richly until they went to seed during the summer. We let the seed heads dry, clipped the plants, and stuffed them into paper bags to dry further. 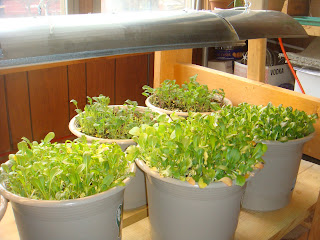 Then it was up the spiral stairway to the roof.


Cold!
I hope the bees are cozy. 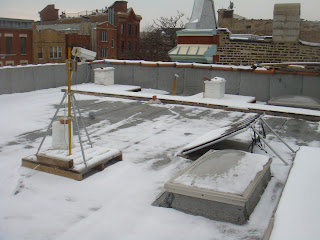 A greenhouse full of buckets reminded me we'd really pushed on SIP emptying this fall--all SIPs are empty, all potting medium dried in the October sun and stored, ready for spring.
I gathered the seed tins and paper bags
holding harvested seed heads to bring downstairs. 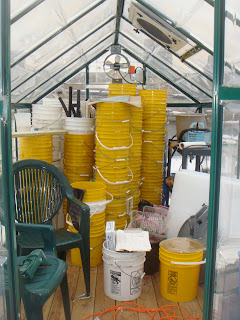 Unlike the consummately organized woman in Debbie's recent post, my seeds are a haphazard amalgam of envelopes, tins, and tiny tubs. Can I plead being busy cleaning out all those SIPs?
This is more my style. First, a happy pile, well marked at least, followed by "mustard and something else" harvested Sept 3. Still, points for twisting off dried seed heads and stuffing them into paper bags...five months ago. 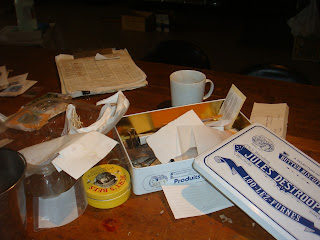 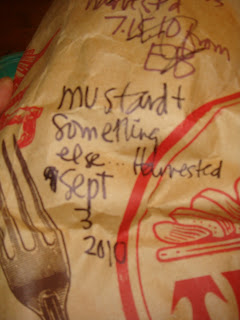 Seed saving is easy but takes a little time at several stages--letting a plant go to seed and dry out, clipping the seed heads, and storing somewhere dry. Next, you clean to retrieve seed.


As I started to clean lettuce seeds, look who stopped by...
Good dog Carl in a crate
we garbage-picked last summer. 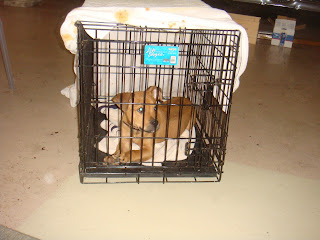 After an energetic run around the place and plenty of kisses, Carl tries out his crate away from home, freeing up Bruce to organize the beans. 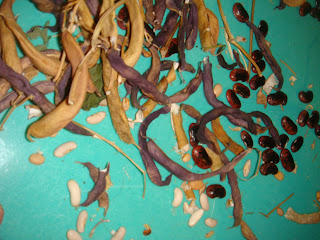 Readers of a certain age might recall cleaning seeds on album covers in the 70s. I learned my lesson well, using the same concept here on a big tray, tapping to vibrate the seeds southward and scraping back up the chaff. 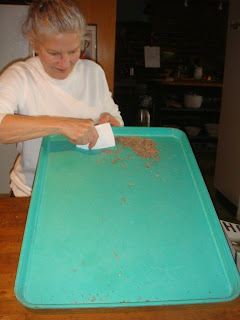 Lettuce seeds
(in there somewhere) 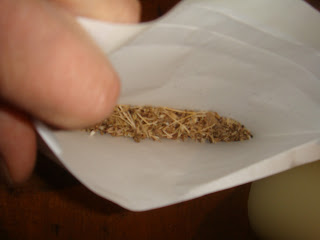 Hat-tip to organization:
beans in their tiny packs 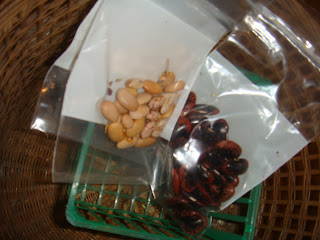 Over at Chiot's Run they've already started their onion seeds, using soil blocks. Debbie got a soil blocker she's offered to share...maybe we should try it too.
Our Mill Creek Red Onion seeds from Bountiful Gardens should be coming through the mail slot any day now...
Posted by H2 at 8:56 AM 2 comments:

I'm guilty of buying more seeds then I need, but that's great for seed swapping. Here's great video on how to organize your seeds by Jean Ann Can a garden coach.

Let My Love Open the Door to Your Heart

Green Roof Growers has a new puppy! (Well, Bruce does anyway.)
Given a clean bill of health by the shelter just yesterday and having spent his first night at home, this little guy walked over in the snow to play today.
Curious 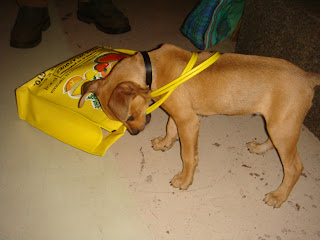 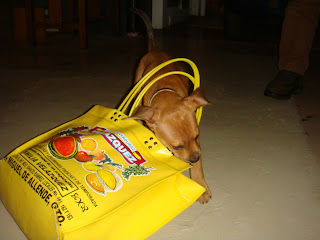 Hey, I'm all tangled up 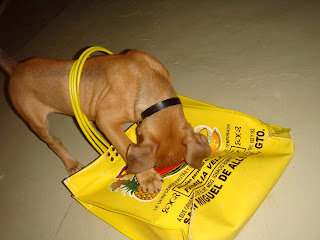 They say I'm a lab + rottweiler 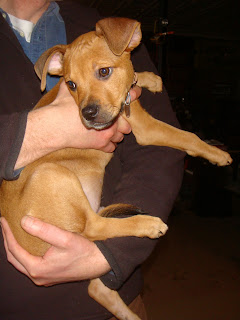 H2 made me take a nap 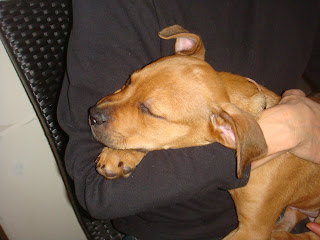 I mistakenly left a little gift before leaving,
but I'm so engaging nobody minded. 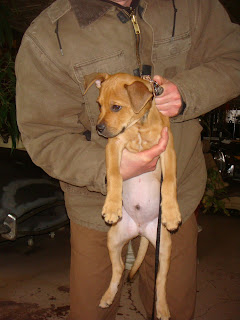 He's got an indomitable spirit and is mostly moving every second, learning the difference between kisses and bites. What's this dog's name?

Art suggested Carl, after Good Dog Carl, a charming book about a rottweiler and a baby.

On the way home from getting produce, I heard this song.  The lyrics match up so perfectly with what puppies can do to you I'm thinking Petey, after Pete Townsend.

Any time the city gets officially involved...well, let's just say it wouldn't be my first choice.

What, for example, would it mean for this lovely, low suggestion-of-a-fence that Bruce built for his community garden? Would it be high enough? Strong enough? Safe enough?

Hey! I don't think it goes all the way around.