Using a large rubber band to secure the 5-gal SIP shower cap
Sounds obvious, but in the past we've used string or the more expensive zip ties. We'll see if rubber bands hold up under all that UV, though the position of these under the bucket lip should mean the sun won't bake them to smithereens. You need nimble fingers to use them, though.

(And kudos to the marketing person who named these rubber bands.) 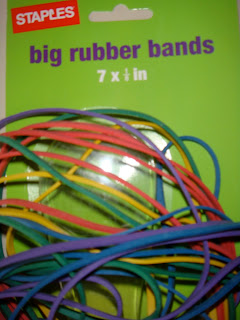 We want to move away from peat moss, which develops over millenia and, when harvested, releases massive amounts of carbon dioxide into the atmosphere.

We're going to make this experiment as exacting as possible, planting two peppers, two tomatoes, and two sets of greens side-by-side, one each in coir/perlite and the other in our old peat/perlite mix (of undetermined exact specifications).

Bruce's recipe is: 70% (by reconstituted volume) coir and 30% perlite. 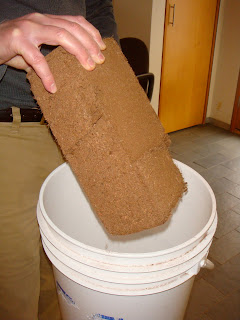 We found a relatively inexpensive (including shipping) source for large blocks of coir at Rolanka. We've been buying the 5:1 compressed blocks. Four come bundled together, costing $58 delivered to Chicago. Each of the blocks, reconstituted with 6 gallons of water and combined with 3 gallons of perlite (from Anton's Nursery in Evanston, $20 for a 4 cubic foot/30 gallon bag or at Home Depot for $2/gallon), makes enough potting mix to fill three 5-gallon bucket planters (3 cubic feet of mix). 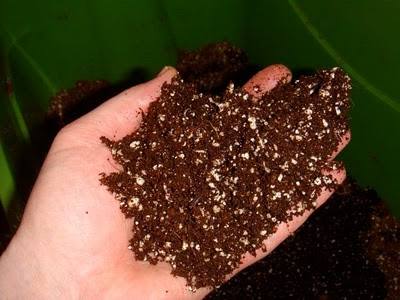 All those numbers can be summed up in one sentence: The coir/perlite mix is $5.50/cubic foot, about the same price as the peat based potting mix we've been using.


Cutting out exact-sized plastic rounds for the "shower caps"
Sounds minor, but I formerly used an old form to score garbage bags and cut out shower cap circles. They were a little large and I always ended up trimming the extra skirt from the top of my SIPs. And yes the results looked raggedy.

I discovered the 16" diameter recycled Olive Garden salad bowl (garbage picking at that graduation party last year was a boon) creates a perfectly sized round for the 5-gal bucket SIP. You can cut a plastic circle out of anything waterproof--a soil bag, whatever. I like garbage bags because they're thin and flexible. 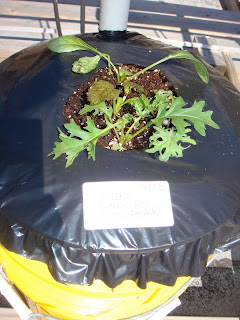 Water fill tubes
One of our local readers last year brought us a roll of polyethylene drip irrigation tubing, which we'll cut and use for fill tubes on the new SIP run this year. Generous person whose name we have misplaced: thank you! 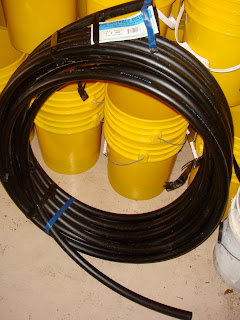 We'll keep you updated on the results of our changes. If you're making any, let us know.
Posted by H2 at 7:55 AM 23 comments:

March 17-18: Planting of the Green in Chicago

A warm March 17 in Chicago, with temps near 70 Wednesday and Thursday. I had a boatload of editorial work to do, but managed to plant two SIPs with cool weather greens Bruce started over at his seed lab.

It was a good day.

Among other things, Art assembled the Sears beehive kit he got at an auction a long time ago. 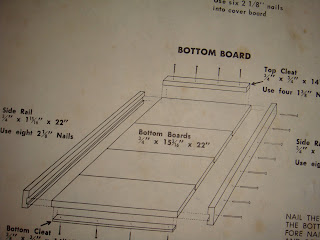 But he did a beautiful job. 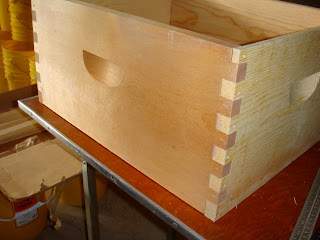 Bruce stopped by early to drop off a tray full of greens
ready to plant. 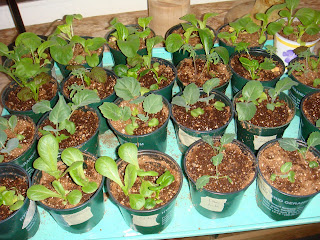 I raced to the roof with my planting guide... 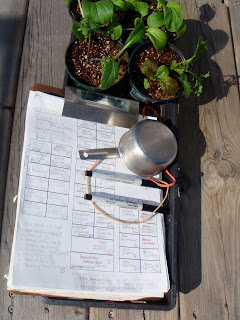 ...and uncovered the big plastic trough that holds the planting mix. 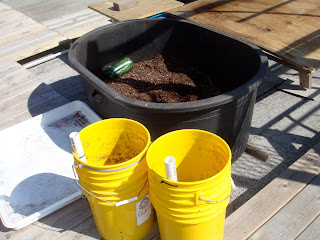 Put in the baby bok choy
with two cups of organic fertilizer. 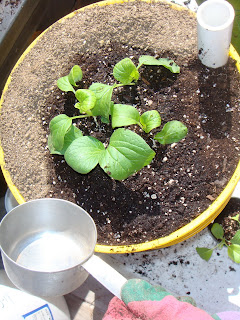 Carved out a center hole
in my garbage bag "shower cap." 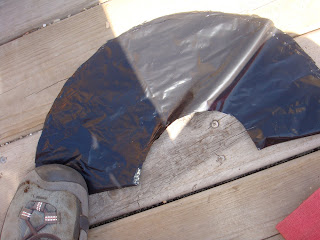 And secured it with a large
rubber band. 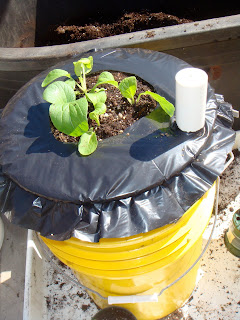 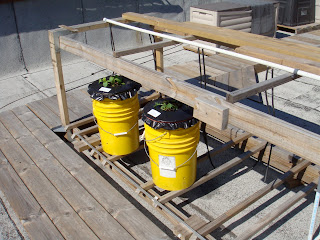 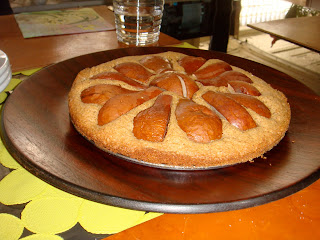 The next day, it snowed. 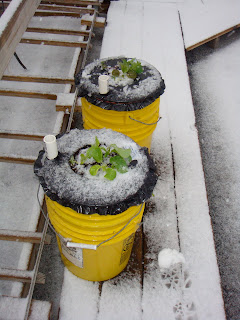 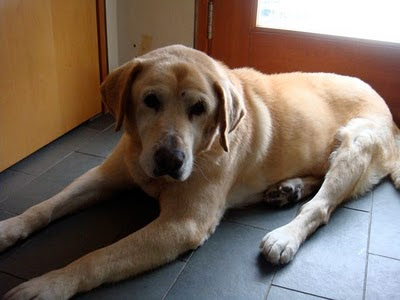 I had to have her litter mate, Ursa, euthanized two years ago. It was harder this time.

We had our first 60-degree day in four months yesterday at 2:30, according to Tom Skilling, and the hive was abuzz with activity.

If you've been following along, you know we wondered if the bees had survived winter.

So this is very good news. 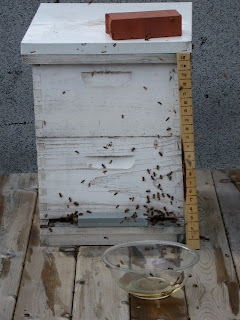 Note Art's crafty measuring stick for monitoring snowfall. We recorded as much as 7 inches on the stick this winter. Hard to believe that eight weeks ago it was minus 13 degrees F.

How do bees keep warm enough to survive winter in Chicago? Norbert M. Kauffeld says in his Seasonal Cycle of Activities in Honey Bee Colonies:

As temperatures drop, the bees draw closer together to conserve heat. The outer layer of bees is tightly compressed, insulating the bees within the cluster. As the temperature rises and falls, the cluster expands and contracts. The bees within the cluster have access to the food stores. During warm periods, the cluster shifts its position to cover new areas of comb containing honey. An extremely prolonged cold spell can prohibit cluster movement, and the bees may starve to death only inches away from honey.

This reminds me of penguin clustering behavior.

We put out a bowl of sugar water to keep the girls fed until spring starts in earnest. 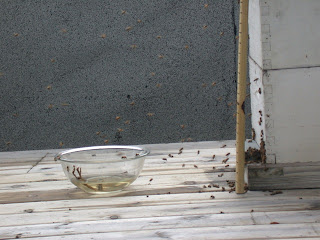 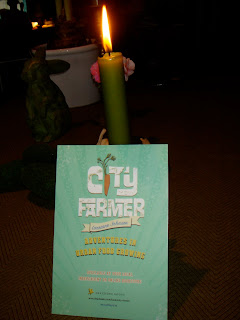 Took a (chilly) look at the roof, discussed all thing sub-irrigated, and then Lorraine and Bruce spent a little time looking at the blog. 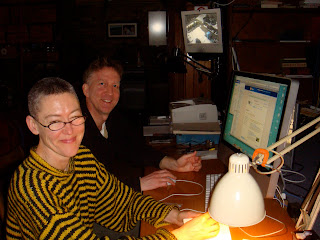 Come back when it warms up!

From the publisher: City Farmer celebrates the new ways that urban dwellers are getting closer to their food. Not only are backyard vegetable plots popping up in places long reserved for lawns, but some renegades are even planting their front yards with food. People in apartments are filling their balconies with pots of tomatoes, beans, and basil, while others are gazing skyward and "greening" their rooftops with food plants. Still others are colonizing public spaces, staking out territory in parks for community gardens and orchards, or convincing school boards to turn asphalt school grounds into "growing" grounds.

Woven through the book are the stories of guerrilla urban farmers in various cities of North America who are tapping city trees for syrup, gleaning fruit from parks, foraging for greens in abandoned lots, planting heritage vegetables on the boulevard, and otherwise placing food production at the centre of the urban community. Additional stories describe the history of urban food production in North America, revealing the roots of our current hunger for more connection with our food, and the visionaries who have directed that hunger into action. Throughout the book, sidebars offer practical tips for how to compost, how to convert a lawn into a vegetable bed, and what edible plants are easy to grow with children, among other topics.