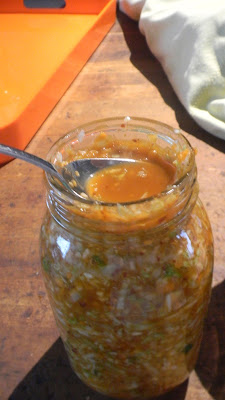 "Getting the vegetables submerged is the most critical factor
for success in vegetable fermentation."
Sandor Katz, THE ART OF FERMENTATION

Oh, this is a beautiful book.  Bruce loaned me his copy for a quick scan and we decided to try Katz's kraut-chi, a hybrid of German suaerkraut and Korean kimchi. At this most basic level, Katz has a nice way of making you feel that even if you stray from the step-by-step, your fermentation will turn out OK. 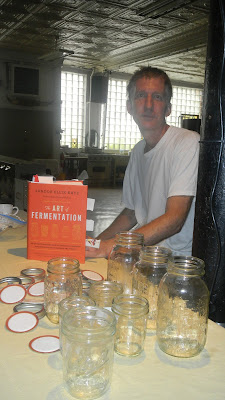 "...fermentation is the transformation of food by various bacteria, fungi, and the enzymes they produce."

Chop, salt, pack, wait: that's Katz's shorthand on how to ferment vegetables. So we did. Bag of organic carrots not shown. 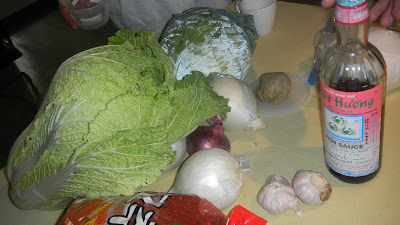 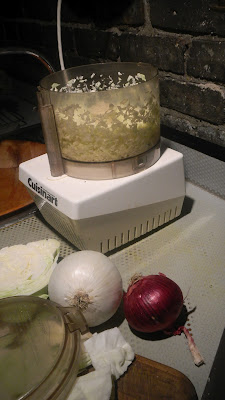 ...while Bruce worked a Sabatier to slice. 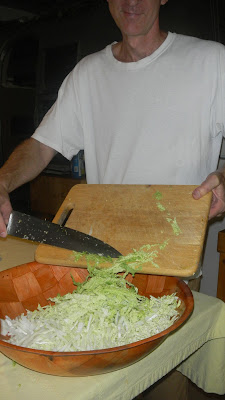 SALT
Katz recommends 3 tablespoons per 5 pounds of veg, a bit salty for our taste. Next time we'll cut back. 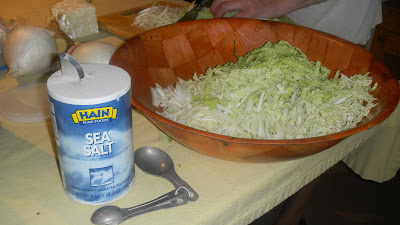 POUND
Not in Katz's quick list, but he recommends it to produce enough juice to submerge the vegetables. 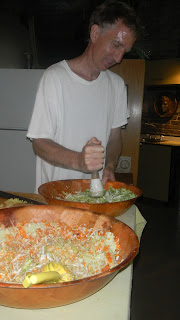 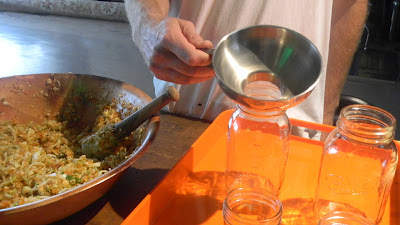 In the past, we've used the crock method, in which the vegetables and their juices are placed in a bowl or other vessel and weighed down with a plate and brick. I liked the idea of skipping this step, but Katz reminds us that the fermenting process produces considerable CO2, which creates pressure inside the jar. "Jars have been known to explode," says he.

The solution is to release any build-up daily, and while I did this several times on the first day, on Day 2 I wasn't so attentive and when I finally got to it the contents burped and overflowed their jars. ("Why does it smell in here?" Art asked.)

Leaving the lids slightly ajar for a couple days did the trick.  And now we wait. How long? Katz suggests tasting after a few days...and then again after two weeks and two months. 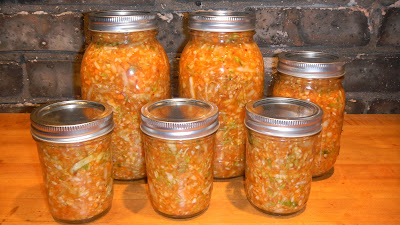 Look at what science is discovering about all this:


The traditional view is that a human body is a collection of 10 trillion cells which are themselves the products of 23,000 genes. If the revolutionaries are correct, these numbers radically underestimate the truth. For in the nooks and crannies of every human being, and especially in his or her guts, dwells the microbiome: 100 trillion bacteria of several hundred species bearing 3m non-human genes. The biological Robespierres believe these should count, too; that humans are not single organisms, but superorganisms made up of lots of smaller organisms working together.

Yes, you can buy probiotic supplements, but seeding your gut flora with fermented foods is more fun and delicious.
Posted by H2 at 6:13 PM No comments: 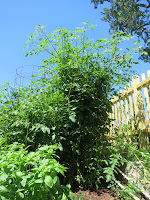 It's been a while since I had my own garden. Many may remember my Chicago rooftop garden, where I used Earthboxes to grow a variety of vegetables with much success. I am a fan of Earthboxes as well as other SIPs - homemade or store bought. SIPs offer the urban gardener with a zero soil footprint an option to grow something on their roof or balcony. They work, they conserve water, and are relatively easy to maintain.

Two years ago, I moved to Minneapolis at the end of the summer. The summer in 2010, I was in Paris and although a great food city, I really missed the fresh, out-of-the-garden produce I had in Chicago. Last year, I rented a place while my house was being built, knowing that I had to move out August 1st, typically when all of my garden produce would be, well, producing. So I skipped trying to grow something and instead bought tomatoes at the farmer's market for about $4 per pound. This year, I'm in my new house and have a little land but not a lot of time. I had a multitude of little projects and two little guys that take up much of my free time.

By the end of May, I knew I had to get something in, so I planted six tomato plants - three cherry sized (Black Cherry, Sun Gold, Super 100's) and three large size (Brandywine, Cherokee Purple, and Better Boys). I had zero experience growing anything in the ground, zero experience with sandy soil, and zero experience with the zone 4 growing season, so I opted for a mix of hybrids and heirlooms and hoped for the best. Using my knowledge of SIPs, I knew that the soil was important. I have sandy soil - check that, I have sand for soil basically. Although I thought it would be great for the root systems of my tomatoes, I knew it wouldn't provide the nutrients or hold water well enough.

I amended the soil with some organic black dirt with manure. Easily enough, worked it into the sandy stuff and then placed my tomatoes where they would get full sun. I added some balanced organic fertilizer and some gardening lime to each area where the tomatoes would be planted and went for it. I then thought that I needed a staking system so I went the old fashioned route - tomato cages. I built simple cages out of concrete wire - about four or five feet high and staked those into the ground with rebar. I watered through the heat and realized how much I loved my automatic watering system and conservation of the SIPs but the plants were doing pretty well.

How well? It's August 15th now and I can't control these guys. The Brandywine is about 7 feet tall and the Black Cherry is about ten feet tall - yes - 10 FEET TALL! It has grown up and over the cages and onto the ground again. This is something I was not prepared for but certainly don't mind. The others are producing and I can't eat enough tomatoes. Gardening on the ground is different than in SIPs but the principles are the same - good growing medium, plenty of sun and water, maybe a nice fertilizer and watch out for pests. I didn't have many in Chicago, 40 feet in the air but here things are a little different. 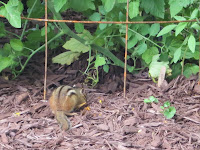 The one thing I have to figure out next year is if I want to also keep feeding the chipmunks!
Posted by Russ C at 4:15 PM 1 comment:

How Many Melons Do You Count? 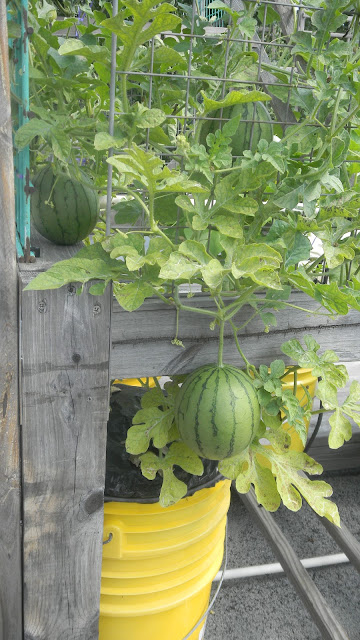 All You Need Is Lunch

2012 summer is a lesson learning to be thankful for what we have. Like this perfect lunch box, picked from the roof a couple weeks ago...and many days since. 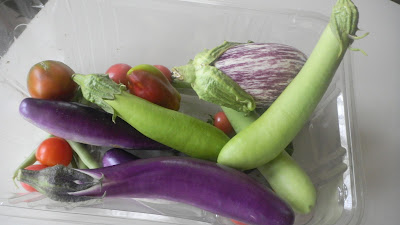 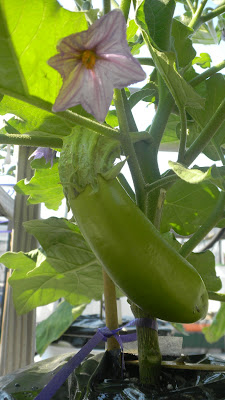 A definite shortage of tomatoes could make one mororse (OK, trust me it has), but there were serious weather reasons for it. We think the hellish heat early in the season caused tomato flowers to drop before fruiting occurred. As a result we missed the first round, except for a few early ones--Whippersnapper, Glacier, and Stupice among them--that somehow got established before being blasted.


Eggs from Bruce's hens and a Jimmy Nardello pepper remind us:
all you need is lunch 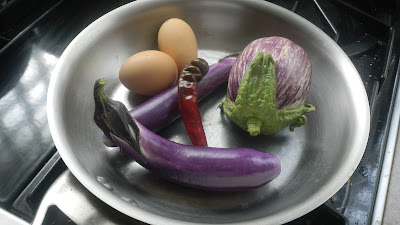 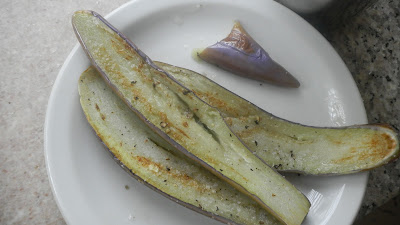 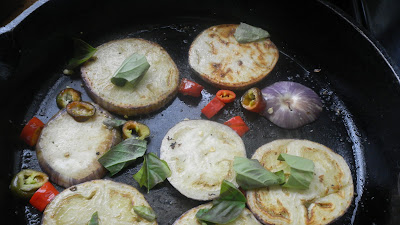 Plus, the eggplant are prolific, and beautifully so. 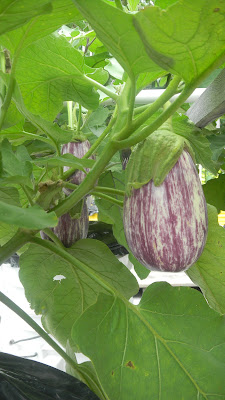 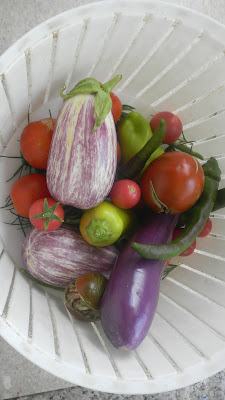 Two weeks ago it was nearly 100 degrees F again with enormous humidities. Today 79 and heaven. The tomatoes have set up a nice crop of flowers and fruit at last. Will they flourish in the late-season light? Stay tuned.
Posted by H2 at 10:46 AM 1 comment: