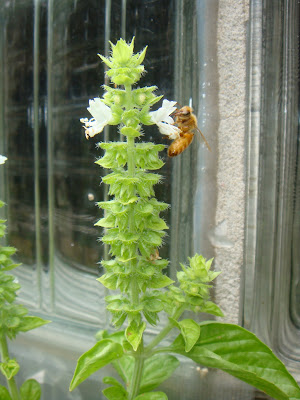 Aug 30, 2010
In Chicago it's 40 degree F on January 27, but bees and humans alike share a little joy in the strengthening full sun. That's all it takes.

I went to the roof, where it was 75 in the unheated greenhouse (it needs organizing, but today's not the day). I'd seen some real bee activity on my bee monitor downstairs and thought I'd grab a quick vid. But as I drew closer the bees signaled their dislike by sending out a couple of peevish scouts to push me back.

No harm done--they apparently just don't recognize me in the dead of winter as they do in summer. Wondering about that wooden post in the video? Just 7 days ago it was measuring snowfall (we ultimately got near 7 inches).

Downstairs, full sun on the hoop enclosure too--far too warm in there for cool-loving greens, so I opened it up. 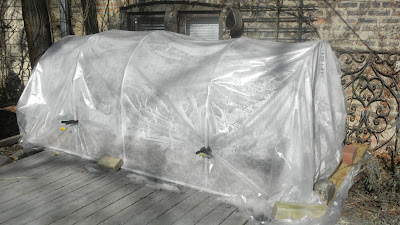 Attaching a piece of conduit to the edge of the Agribon fabric (shown in this post) really does make it easy to lift the fabric as a single entity and rest it on top of the hoops. These plants were happy to just breathe. 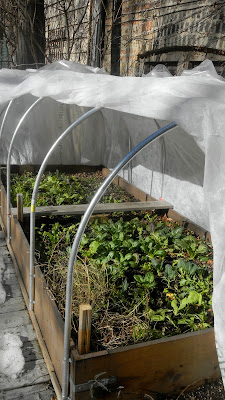 What a joy seeing this deep green parsley popping out with all the other usual suspects--tatsoi, mustard, arugula, kale. I'm kind of winging this whole low tunnel effort.  Fast Grow the Weeds gives me a clue:


I planted ... kale and salad greens back in late September.  These will be completely harvested by late March and then I’ll convert this greenhouse into a seedling nursery. 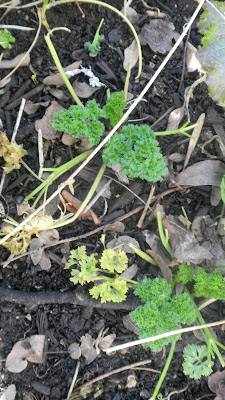 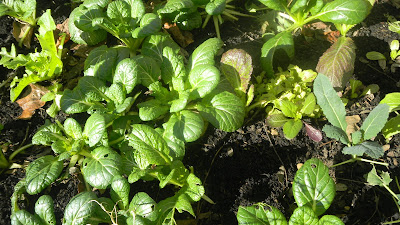 But instead of thinking about it, I picked a salad.
Posted by H2 at 3:29 PM 2 comments:

All About Sub Irrigated Planters

Nice job, Greenscaper Bob and Frieda Lim. Just the info people need as spring approaches...
TEDxManhattan: How to Cultivate a Logo from Sybil Dessau on Vimeo.

TEDxManhattan: How to Cultivate a Logo from Sybil Dessau on Vimeo.
Posted by H2 at 3:24 PM 2 comments:

Labels: How to Cultivate a Logo

Fresh Greens on a Snowy Day in Chicago 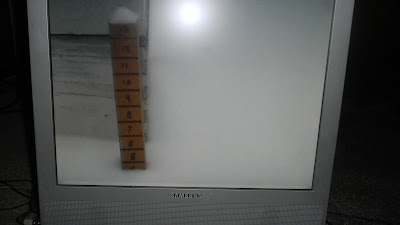 Up on the roof, Art's new snow gauge shows we're nearing 5 inches here in Chicago, good insulation for the beehive (at left in the picture) we hope. Shot this on the monitor down here in our toasty warm living space after shoveling those same 5 inches across the breadth of our generous sidewalk. 17 degrees F outside. The snow is beautiful. 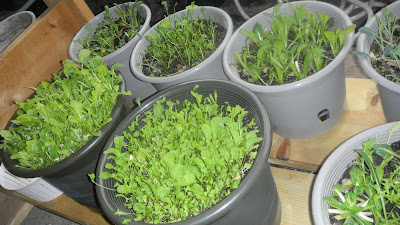 On the second floor, the cool-weather greens are thriving in their SIPs, if slowly in the chill. 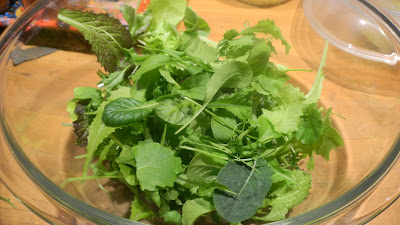 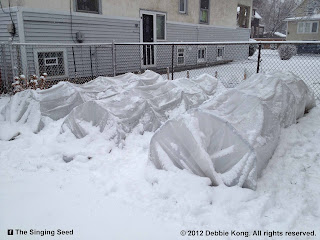 Today it was 25 degrees in Chicago. We expect to have a severe winter storm with 6" to 8" inches of snow by midnight. Yesterday it was 50 degrees and you wouldn't have known it was Jan 11th. Either way, our winter garden is still showing signs of life. Here's proof that you CAN grow a winter garden in Chicago. Growing anything makes me happy no matter what season it is.

Under the low tunnels the greens are doing well. I have to admit I'm a little nervous about the unusual amount of heavy snow we are going to get tonight, hoping the weight of the wet snow won't bring down the low tunnels. 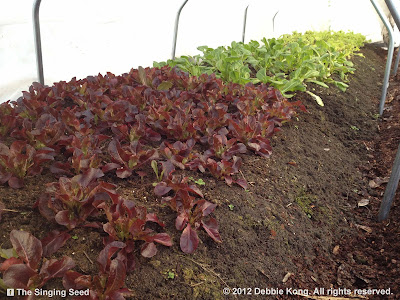 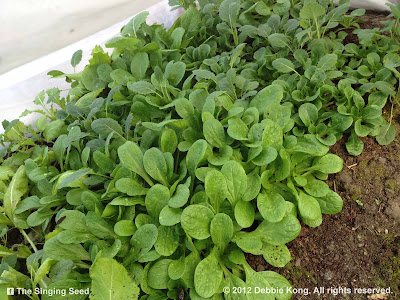 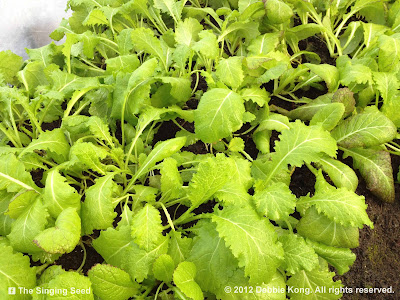 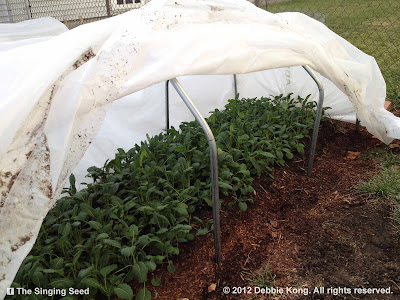 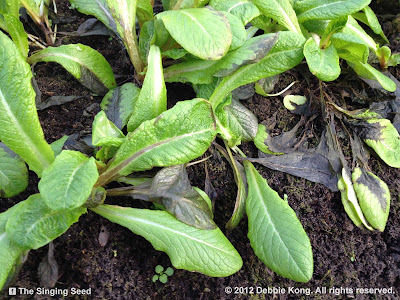 Not everything faired as well... but that's ok. After-all, I have to remind myself that it's a winter garden trial. 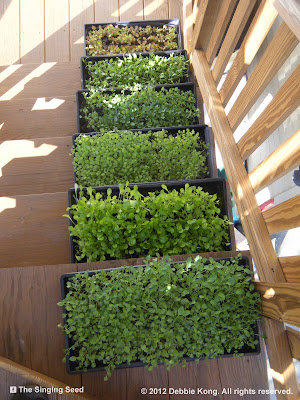 The beginnings of a winter garden.
A different time. Another season.
October 23, 2011 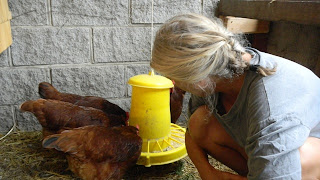 Several of my neighbors eat my chicken eggs, and one of them wanted to know what kind of chicken feed I use.  Here's what I told her.


::::
They've been eating organic feed since they were two days old.  Until six weeks ago it was a blend that relied on soy for its protein component (around 17% by weight).  I've since switched to soy-free organic layer feed for two reasons.

First, because of the levels of omega3 fatty acids available in soy-free feed.  Those fats make their way through the chicken and show up in the eggs. You might have seen the egg cartons in the supermarket that make statements about the eggs having omega3 fats.  My eggs are now the same.

The protein in the soy-free ration now comes from flax meal, fish meal, and crab meal.  Still organic, but has those good fats.

Also, I think letting the chickens forage for bugs in my sideyard can only help round out the nutritional value of the eggs.

The second, maybe equally important reason, is that soy may be harmful.


Originating in China, soybeans have been consumed by humans for thousands of years. It’s only been in the last century that the way we eat soy has changed dramatically. Fermentation is how soy was first prepared for eating. It was a side dish that complimented the rest of the meal. Raw soy is not fit for consumption and can be considered toxic. Today’s soy is processed in variety of methods (not fermented) which denatures the proteins and increases levels of carcinogens.

Soy is a prevalent ingredient in almost all processed foods. Those with a soy allergen (it’s one of the top eight food allergens for humans) know this best. It’s in fast-foods, baby food, processed meat, breads, etc. Unless you are very conscious of everything you eat, it is easy to consume an unregulated amount of soy products every day.

Perhaps you are not allergic to soy, here are some other findings that may be important to you. Soy is not a complete protein (as commonly believed), lacking some important amino acids. Soy foods can cause deficiencies in calcium and vitamin D. Soy increases levels of estrogen (possibly simulating the growth of related tumors) and decreases levels of testosterone. It has been related to pre-mature sexual development in females, and delayed development in males. Animal studies show soy foods causes infertility in animals.

Because soy is a prolific food allergen, the FDA requires it to be listed clearly as an ingredient in processed foods. At this time the FDA does not require meat, raised on soy feeds, to be disclosed. People highly allergic to soy are affected by this.

Soybean is the human choice for animal feed, thus covertly making it another avenue into our daily consumption of it. Chickens receive the highest level of exposure, and it is retained in their meat and eggs.

::::
The wholesaler is CFS Specialties located in Cashton, WI

The retailer is Backyard Chicken Run.

John, the owner, also sells some nice, though expensive, dog and cat foods.  The best part of the deal is that "free" delivery is included in the price.  That price, at least for chicken feed, was the same as I was paying at the previous supplier (The Feed Store in Summit, IL).

I think his business is well worth supporting.


:::
More on the nutritional and dietary fats found in chicken feed.
Posted by Bruce at 11:11 AM 7 comments:

One of the best things about whole rooftop gardening project is the number of interesting people I've met.

Art and Chelsea are a couple I think you'd like to know about.  We were introduced a few years ago, thanks I think, to both of us appearing in Sky Full of Bacon videos.  This latest video makes the connection between their urban farm/gardens and their restaurant Pleasant House Bakery.


Farm To Barstool from Michael Gebert on Vimeo.


Their food is fantastic.  I'm not alone in thinking that--they've been winning plenty of accolades from food writers in the Chicago press as well as enthusiastic ratings from Yelpers.