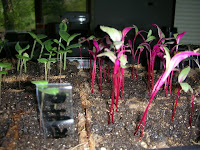 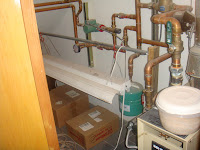 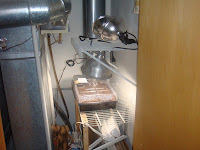 Buzzy Seeds sells grow kits that all start from seeds. They are easy to use for new gardeners and kids. Not sure what all they have, but I've bought their herb kits and they do great. The kits come with seeds, soil, a pot and instructions. So it's all in one and not expensive at all! They have a website, too. It's www.buzzyseeds.com.

Thanks Bruce! Your post is very timely. I just got packets of 4 different heirloom tomatoes and 2 bell peppers. This will be my first experience at seed starting.

Nice to hear from you. And thanks for the comment (You too , GL).

I had a question for you--What was it that made you decide to start plants from seeds for the first time? I never did because I (wrongly) thought there were an endless number of special "tricks" that I'd need to remember to be even modestly successful.

Good luck with the plants!

I haven't stopped by Corrente since the primary wars. Thanks for the reminder.

Hi there, I cobbled together a seed starter myself. It really is simple to do, and gives them a good start. Now I need to write about the system I plant them out into - still indoors as I live in a flat.

If I understand you correctly, you're going to grow your tomatoes to maturity inside. Do you need to provide artificial light? If so, what kind of bulbs do you use?

I actually grew last years with only natural light - I have a very well lit balcony area where I grow my plants. Never used any artificial lights - sounds like quite an expensive thing. I will be documenting my growing arrangement properly sometime soon.

you can many seeds and plants in http://ethnoplants.com

Want To Increase Your ClickBank Banner Traffic And Commissions?