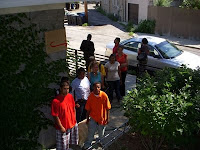 This morning, a small group from nearby Dr. Pedro Albizu Campos Puerto Rican High School (PACHS) came to look at what we're doing on my roof. 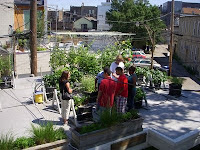 They were led by two teachers who thought our project would fit in nicely with the school's urban agriculture initiative. Michelle Torrise, one of those teachers, described the purpose of the visit this way:

We are hoping to raise awareness of the work being done at the high school and develop relationships with fellow urban farmers. There are several initiatives going on including the development of a social ecology/urban agriculture curriculum, the building of a rooftop greenhouse, and the creation of a community garden in Humboldt Park. Other projects include an after school programs, a student led recycling programs, community beautification projects, and a school wide initiative to fight obesity.

Here is a link to some pictures on Flickr from last year's summer program.

There were about 10 students and they asked some great questions. If I had to describe them with only one word, it would be curious. 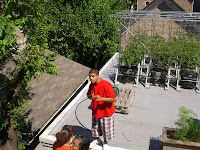 I wanted to tie in what we're doing with some of the program's goals. After a moment or two I forgot all about that and just starting talking. So my presentation wasn't all that polished, but I'd like to believe that was part of what made it bearable. 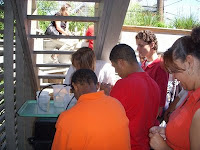 I gave a little demonstration of how my automatic watering system for the SIPs works. From a post on the AWS:

These loops aren't pressurized. Instead water moves from the 5 gallon reservoir to the individual planters via the loops by atmospheric pressure. I'm sure there's a scientific principle behind this, probably discovered by Archimedes, but I don't know what it is. So I'm going to call it the "water-level principle". The expression "water seeks it's own level" is another way of putting it.

This year I've been growing what I thought were Giant Grey Striped sunflowers. Last year I planted the seeds, from Victory Seed Co., and had a great yield. So I saved a head and dried it, thinking I'd use it to plant sunflowers everywhere this year. So far so good. I planted two SIPs on my roof with the saved seeds, plus there are about 10 volunteers cropping up on the side of my garage. You can eat the flowers, just before the heads open up is supposed to be the best time to harvest them.

That's all changed. It seems that last years sunflowers were cross-pollinated by the unidentified rudbeckia that are growing on the side of the garage. (Or more likely from bees who had just come from a different type of sunflower. Thanks for the tip, Mr. BrownThumb.) This year the sunflowers have their usual thick, eight foot tall stalks, sturdy enough to support their giant (typically 12" diameter) sunflower heads. But because of the cross pollination they have 3 or 4 smaller flower heads coming out the sides of that stalk. Weird looking, possibly not edible, but worth talking about as part of an amateur Science Lesson. 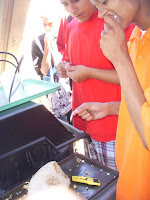 I might have emphasized the wrong thing about the sunflowers. I'm guilty of telling you (and them) why I thought they were interesting. Some of the students liked them for a more obvious reason.

It's nice to eat the seeds directly from the plant.


While I was talking to one half of the group, Heidi was giving a demonstration on how to make these planters to the other half. She showed them the kind that are on my roof, as seen in these pictures, and those that you make using 2 buckets. Somehow she found time to take all these pictures. 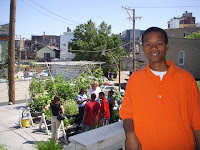 This student had more to say about the look of the building than what we planted.

In case he sees this, here's the story of how it got built along with a few more pictures. We were inspired by the work of Rick Joy and Luis Barragán (bio.)

I feel like they got something out of it, but that could just be the fog of wishful thinking settling in. We hope to keep working (?) with PACHS . And for anyone else out there who may be interested - Send them an email! It's a great program.


There are some ideas floating around in my head involving the parallels between Basque and Puerto Rican Nationalism, Andoni Aduriz's Mugaritz, and chicory. I can't pull them together though.

We had a fine time with these smart and imaginative students. They're doing great things for Paseo Boricua with their urban garden project.

Hmmm it is suppose to be an heirloom sunflower so it must have been pollinated by a bee that hit another sunflower in the area.

My neighbor grows "Mammoth" and I grow some hybrid small red one. This year her Mammoth has some red stripes in the petals that I figure must be from mine.

I thought it might have been cross-pollinated by a one of the flowers nearby because the resulting hybrid had some of the same non-sunflower characteristics of the plant on the ground.

It makes more sense that it was done by another variety of sunflower though.

As you can tell, I'm a little shaky on the science.

We all live in what use to be called West Town (and now Ukranian Village, Wicker Park, Bucktown, Logan Square, depending who you ask), a mile or two NW of the Loop.

I first saw your blog a few months ago and found it helpful. So it's nice to see you here.

Thanks for stopping by.

Glad I found you. It is always nice to find the odd local "garden" blog on the net. I wish there were more locals sharing their planting on line.