From Guy Debord to Butchering a Pig

When I was 11, each student in my class was given a pig fetus to dissect. It made me queasy, for a long while I felt a twinge of nausea every time pork was on my plate. Skip ahead a few decades--for the past couple of years I haven't eaten much meat for some fairly common reasons.

Believe it or not, this is loosely connected to our rooftop vegetable project. Skeptics can skip ahead to the end of this post for the link.

[Also, I'd like to note there are no graphic slaughter pictures anywhere in this post. That was done beforehand, at the processing plant owned by the farmer. However, if you click through on the embedded slide show--it's innocuous cover photo is of a sunflower--you'll see pictures of an already dead half pig being cut up. Nothing bloody, but they can be a little startling.] 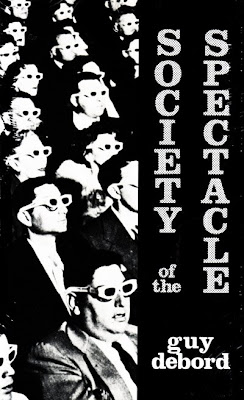 There are more than a few people who celebrate the joys of nose-to-tail eating by reading about it, travel the world in search of the latest taste sensation, or who fetishize a peasant cooking technique in their expensively renovated kitchens. In response to a world where the "social relationships between people are mediated by images", I've done some of those things--and more--looking for a way out.

One of the reasons I stopped eating meat was because I felt something was missing. On display in the meat case of my local market are the disembodied pieces of a gruesome process. Unsaid, ultimately only hinted at, is the (probable) suffering and death of an animal. My decision to use every part of a conscientiously raised and slaughtered pig that I butcher is, in part, a reaction to that.

::::::
Like I said, I don't eat much meat. In spite of that this is a useful skill, one that I hope will be taken up by other amateurs like myself.

Here are a series of photos I took of a recent pig butchering demo given by Rob Levitt of Chicago's Mado Restaurant. They are offering charcuterie classes early next year and I'd urge anyone with the slightest interest to get on their email list. They'll fill up fast.


It's important to know something about basic pig anatomy before beginning. Helpful skeletal charts can be found here. Because that site is run by a Canadian butcher, the individual cuts of meat are different than those usually found in American markets.

::::::
Knowing all this, now what? One option is to buy a pig from Mado's supplier, Slagel Family Farms, and butcher it ourselves. We're thinking of hosting a couple of informal meals for 25 people using the whole animal and featuring some lesser known, though delicious, pork dishes--among them testa and porchetta--early next year.

Before breaking the pig into parts, you should know how you want to use them. From half of a 180 pound York-Duroc crossbred pig, my amateur butcher's eye estimates the yield would be:

20-22 servings of porchetta made from the saddle, which is basically the deboned middle third of the pig. You take the loin (not the tenderloin!)--think of the center of a pork chop, now extend that circle into a 24 inch long cylinder--wrapped in the attached belly (same as uncured bacon) like a jelly roll. Inside the roll are garlic, herbs, and spices. Truss the whole thing up and roast. Cut in 1 inch slices to serve.

1 ham, weighing approx 14 lbs. Two ways of prepping. One is to brine it for a week and then roast it. Or you can make a salt cured prosciutto/dried country ham. That takes at least 4 months and a lot of know how. Either way it'll serve 12-15 people.

~ 3 pounds coppa. A dried pork product similar to prosciutto but made with the top of the shoulder.

~ 7 lbs shoulder. Includes the hock. What's left after the coppa is removed. Can slow roast the rest, or make sausage.

~ 3 lbs ribs. Make bbq ribs or freeze to use later. Once thawed, a possibility is to slow roast them in a stock made from the backbone, to which you add tomatoes, herbs, and wine. Pull the meat bones off when tender and add back to the rich liquid to make pasta sauce for 12-15 people.

~ 3 lbs misc. scraps. Slow roast them with some of the backbone stock. When tender, shred them with paddle mixer, top with rendered fatback. You have rillettes--great on bread.

~ 15 by 20 inch piece of pig skin, good for cracklings, cotechino, or to flavor cassoulet

That's a lot of pork.

This isn't being done to make money, We're trying to figure out how to cover our out of pocket costs while learning, sharing, and having a good time. The first thought was to serve the porchetta and testa at our dinner. The cured pork products might feature in later gatherings, while the frozen parts could be shared with the group.

We've been talking to a woman (Hi Anna!) who puts on (informal, low cost, ambitious) supper club dinners, trying to figure out the details. We like the idea, though some of the press makes them sound like people I don't want to be around.

[Updated 12.02.09, It's On. For two consecutive Sundays (January 24th 31st and Feb 7th.) in early 2010, we'll get together with 20 relative strangers and serve an entire (half) pig. Anna came up with a great menu based on some of the ideas in this blog post. We're butchering the pig on Wed, Jan 20th Thursday, Jan 28th in front of a small group. Email Anna at Turning Fork Supper Club for more details and to rsvp.]

If you're looking for local producers of humanely raised meat, EatWild is a good resource. Finding one, like Slagel Farms, that does the slaughtering/processing on site was important to me. Here's another fascinating story of a family pig farmer slaughtering and butchering his own animals.

To cut down on delivery fees contact a local restaurant who uses a farmer you want to support and try to combine orders. In our case, because Slagel Farms delivers to Mado Restaurant weekly, we can get "free" delivery.

So how is this connected to growing vegetables on rooftops, the subject of this blog?

It's another way to make meaningful connections while sharing skills and eating well.

p.s. some more food for thought.

Updated 1.28.10 - Here's the slide show of the Hog Butchering Demonstration

Updated 1.31.10 - The slideshow of the first Sunday Hog Dinner

Bruce, great post! having grown up in chi-town myself, i would have never thought I'd be doing what I do now but once you butcher that first one, it's all second nature after that! 2 a year here plus sheep(for the gyros, gotta have that ya know) chickens about every week, the deer etc. You'll never be disappointed by your home grown meat! The cuisine you can create with the meat will rival any meal you could eat made by those professional chefs.

Thanks for the encouragement.

Raising any kind of animals, for meat, in the city is next to impossible, so we're doing the next best thing.

And I agree, cooking for yourself is the way to go. Cheaper, healthier, better tasting; it becomes food instead of fuel.

Nice post Bruce! Two of my favorites--pork and Guy Debord!

An unlikely combination, but I think they go well together.

Get daily ideas and instructions for making THOUSANDS OF DOLLARS per day ONLINE for FREE.
CLICK HERE TO START TODAY

Hello! I think these information Will be helpful for you.