What's the connection, if any, between rooftop gardening, my political droppings, and cooking? I'm guessing they feed off of each other in ways that don't need to be talked about here. Ultimately I find a kind of elegant beauty, a magic that isn't for sale, in cooking and growing food. I'm trying to apply that mojo to some of this world, so far with limited success. 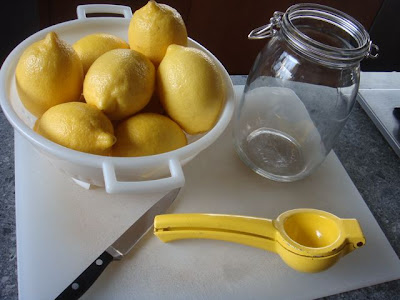 When organic lemons went on sale at our local market, I decided to take on a couple of classic recipes: preserved lemons and candied lemon peel.

Making preserved lemons involves covering them with lemon juice--at least one lemon is juiced for every one that's preserved--so you're going to have a lot of leftover peel. This means it's a good idea to both preserve and candy around the same time. Rather than waste the rinds, just cut them off before you squeeze the juicing lemons, setting the pieces of rind aside to candy after you finish prepping the jar of preserved lemons. (You don't have to make candied peel. You can also zest--and freeze the result--the lemons before juicing.)

For the budget-minded, this is one of those things worth doing yourself. It'll cost you less than $2, and a little time and effort, to produce a preserved lemon. They sell for $7 apiece, plus shipping. The candied peel is $4/lb, in this case it's almost free.

What's all the fuss about? To use the copy from Zingerman's -


I’ve always liked the idea of preserved lemons. But I get stumped at the same place you probably do: what do you do with them? You can research recipes and get an idea but I wasn’t truly inspired until I ran into a friend who lived in North Africa.
“Oh! Preserved lemons! Can I have your jar? I love them in everything!”
Everything? Simple enough place to start.
I started trying what she suggested, adding them everywhere. Simply cut off a slice or two (return the rest of the lemon to the brine), dice and mix into your favorite sauces. Toss with salads. Garnish grilled meat. Add a slice to a martini. This is fun.

I combined a couple of recipes: Mark Bittman's and 101 Cookbooks (she in turn copies Paula Wolfert).

The idea is to cover cut lemons with a mixture of salt, lemon juice, and spices and let this cure for at least 2 weeks. You end up with a salty, sour, and slightly sweet garnish that works with a wide variety of grains, vegetables, and stews. It's also great as a pizza topping. 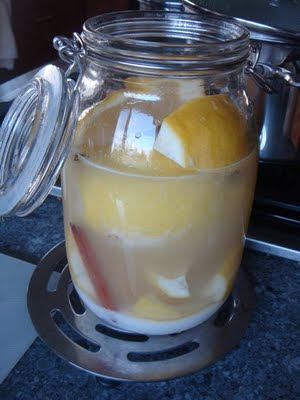 After covering the lemons with juice, cover and shake the jar. Leave it out on the counter for 7 days, shaking once a day. Then put it in the refrigerator for at least 7 more days. Some recipes say shake it in the fridge, some not. It doesn't seem to make a difference.

This is a traditional North African process, and through trial and error became a way to store lemons long before refrigeration. I've read that the acidity in the lemons available to us could be different than those in traditional lemons, so there's a chance that mold might develop unless the finished product is refrigerated. Because of that, most recipes I've seen say to store the jar in the refrigerator.

There are plenty of recipes online. This one isn't bad. Though it's for oranges, not lemons, the idea is the same. Keep a couple of things in mind.

First you boil the julienned peels in several changes of water.


The idea is to get rid of the bitterness, so taste after the third change and keep changing/boiling until it's gone. There shouldn't be any off flavors; it should just taste like bitter lemon. To get an idea of what you don't want, taste one after the first boil.


I use 2 parts sugar and 1 part water in my simple syrup. I make enough to just cover the boiled peels, and cook at a low boil for 20 min or so in a sauce pot. The lemon rinds will become slightly translucent, absorbing the sugar (?), and then they're done. Drain them in sieve and let cool a bit. If you put the final dusting of dry sugar on when they're too hot, you'll just have a gooey mess. Lay them out on parchment to dry as per the recipe. 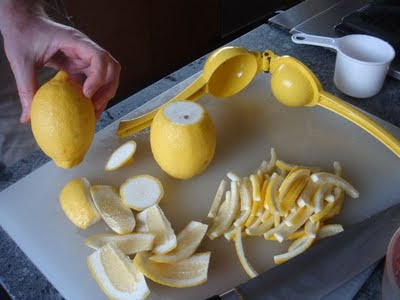 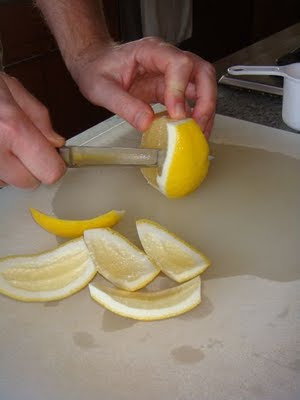 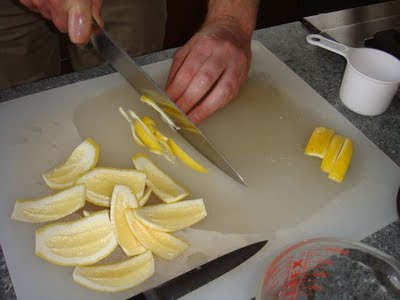 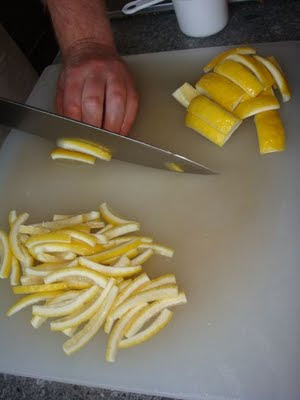 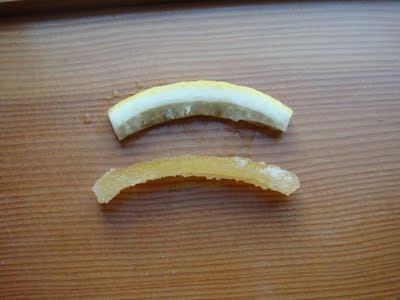 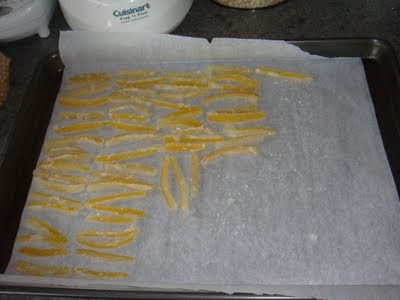 H2--thanks for all these great pics, btw--found out that candied lemon rinds are even tastier frozen. Curiosity has it's rewards!


For more on cooking, check out my posts on my food blog, Kitchen Exercises.
Posted by Bruce at 11:11 AM

Labels: How-to, lemons, recipes, What are you eating?

Preserved-lemon pizza? I am so there.

Also, thanks so much for plugging the S&B cookbook on yr blog -- which I only just saw today. Al-most there ....

Lovely, I just made the same thing. I can't wait to try them.