Regular readers will remember a year ago when we tried the indoor-growing experiment with cool-weather greens. We followed up on it here.

It worked beautifully. Thanks to the southern sun--albeit low in the winter sky--fresh greens grew from November through March in our unheated second floor, where temps during a Chicago winter hover between 38 and 50 degrees. Even taking into account periods of cloudiness, the greens grew, not flourishing as they do outside in March and April, but doing just fine with no auxiliary light or fan.

We were certainly going to do it again.

So in early October I set up six fresh SIPs and seeded them with leftover seeds from our GRG 2009 nursery: collards Champion, two kinds of kale, cress, mustard, and a nice greens mix. 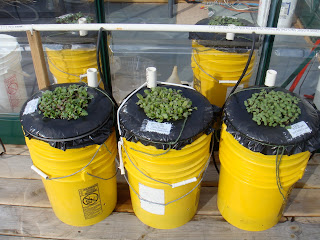 I'd saved the dried seed heads to plant from the mustard (Wild Garden Pungent Mix), a much-loved green from Gathering Together Farm: 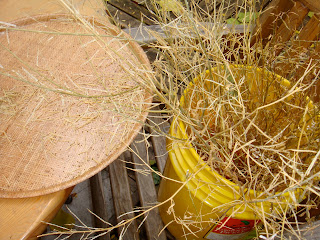 Once all the seeds sprouted--we domed them up with plastic cloches until they did--and got their first set of true leaves I set them all outside.

Here they are right now. These are cool-weather greens whose very sweetness relies on exposure to cold temps. We won't bring them indoors until the first frost threatens. 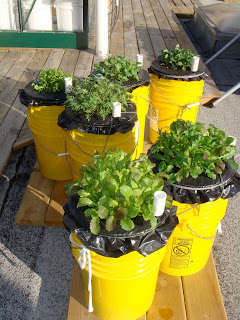 I picked our first salad last week (about a month after planting) and added a few of the year's final tomatoes off the withered vines. 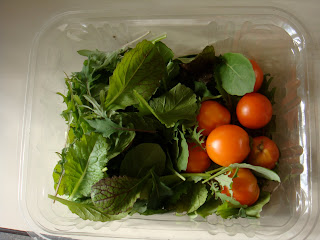 You can't beat sub-irrigation for indoor food growing. The 5-gal bucket SIPs won't drink as much inside as they do when they're lounging in the direct sun of spring and early summer, so we keep the water reservoir just half full.

We're also using the pop-bottle planters we made last year for mini-salad gardens. If you have a nice south-facing window in a cool spot, check out these easy steps to creating your own indoor salad bar. 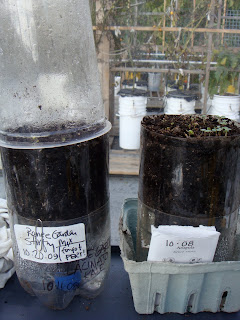 Over at Slow Coast, on the beautiful British Columbia Sunshine Coast, they're asking: "Eventually, we need to answer the question, “How self-sufficient can this region be in terms of food?”

Self sufficiency in the form of winter microgreens is a fine first step.
Posted by H2 at 10:47 AM