Butchering and Eating a Pig - Part 1

Eight days ago, Art and I picked up half of a 190-pound pig from Mado Restaurant, where it had been dropped off by the Slagel Farm delivery truck. Soon it was lying on a table in my living room, and shortly after that people began showing up. They came to watch me butcher the pig for the two subsequent Sunday dinners we were holding with some new friends.

[All pics by H2. A previous post that traces the path from rooftop gardening to pig butchering can be found here.] 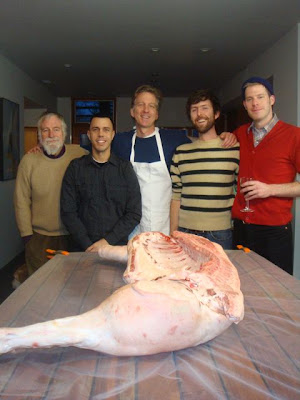 We started out with the conceit that every part of the (half) animal would make it onto our plates. The menu derived from that decision informed how I cut up the pig.

First I broke the carcass down into its primal cuts: Shoulder, saddle, and ham. From there I cut it into the pieces that would be used by the cooks: Hock, trotter, leaf lard, fat back, boneless saddle for porchetta, coppa, deboned shoulder for sausage, backbone and ribs.

As I was doing this I answered questions from the group. They had all come to learn how to do it themselves, or were just curious how a pig became meat. In either case, in a few days they'd be eating what I was cutting up. 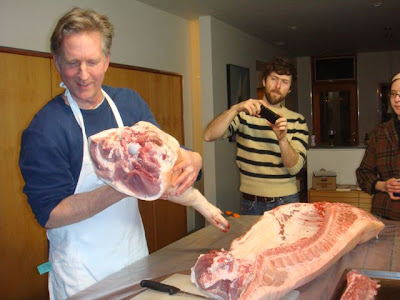 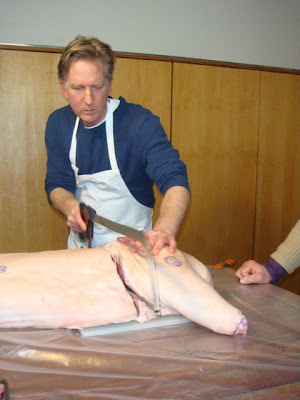 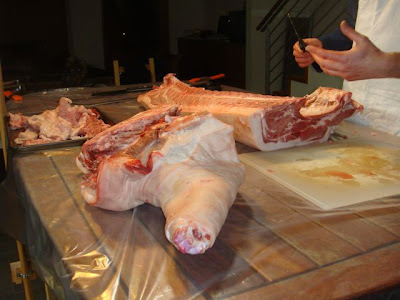 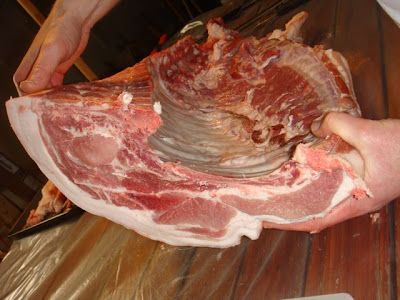 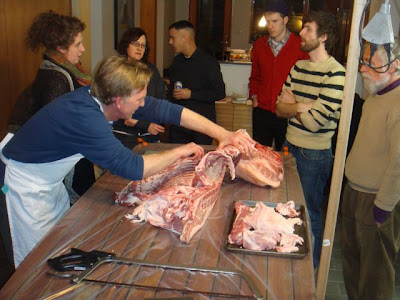 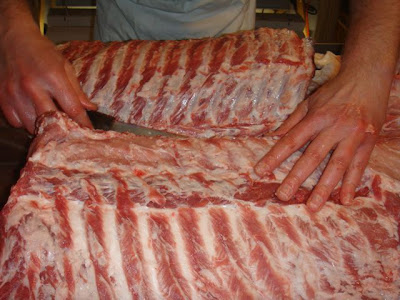 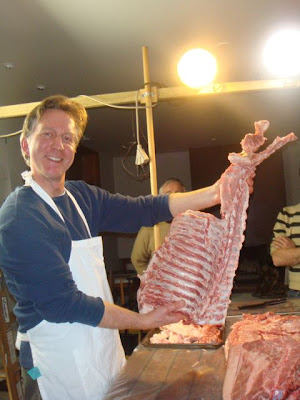 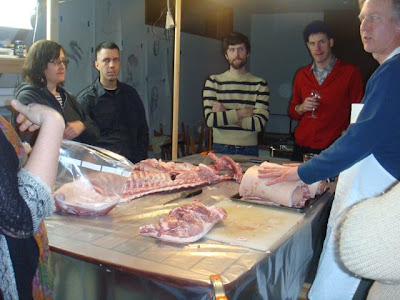 Here's the slideshow of the entire butchering process.


The first dinner was a success, and a great deal of that was due to Anna at Turning Fork Supper Club. The second dinner is this Sunday. We have lots of good shots of food prep: terrines, testa, sausages, soup, porchetta, and plenty of pictures of people enjoying themselves. More on that in the next post.

Thanks for sharing the slide show of the whole process.

We dove right in to this and the results have been incredible. It's another one of those things that have been turned over to "experts" with the end result that we all miss out on something so basic. Yes, it takes a little bit of technique, but it's nothing that a decent home cook can't handle after seeing it done once.

Thanks for the kind words.

I was glad to have experienced the efforts of your butchery by tasting all the great things that you and your friends put together.

I'm glad you guys could make it and that you enjoyed yourselves. It was also nice to hear some of your restaurant/food ideas.

Hope we can make it happen with a lamb!

Bruce, Great presentation. It really makes me mad that I missed out on this. I looked through the slide show with great pork envy. I hope everything was a success as I know how much you guys had to plan, schedule, organize, etc on this maiden pig voyage. Cheers.