What If: A Garden Dream

I walk past this lot in our neighborhood at least a dozen times a week. It's been vacant for at least 20 years. It's a mystery why the thought never seeded itself before.

This would be perfect for an in-ground food garden. What if the owner would let us turn it into a cooperative growing space?

With full southern exposure and positioned roughly mid-way between Bruce's and our house, we could create a place that would feed more than a few people. 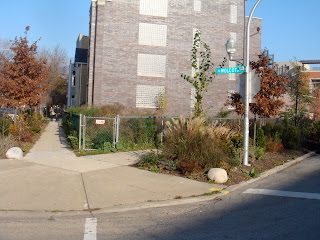 Some time ago, I met a man planting and caring for the parkway--the strip of land between the sidewalk and the street--and I stopped to talk. He's the owner of the fenced triangular lot (catch a bird's-eye view here) and was making an extraordinary effort to create a textured, partly-native-plant parkway where before there'd been only grass and the minimum city-planted trees.

I told how happy we were that the lot remained undeveloped (I'm not sure how he feels about it) and that we appreciated his parkway work. Now I'd like to get my shovel into the soil inside that fence.

The lot itself has a few quirks that make it less than perfect for a building, even in the best of economic times. It's virtually impossible to get a building permit for plans that don't include a provision for off-street parking, like a garage or parking pad. Since this property doesn't have access to the alley and permission from the city to add a new driveway/curb cut is very hard to get, odds are the lot is going to stay vacant for a some time.

Starting with the Google Maps satellite view and knowing that Chicago lots are 25 feet wide, you can estimate the triangle is about 85 ft long on each of its two legs. That makes its area 85 x 85 x 1/2 = 3612 square feet. More or less.

We could grow a lot of food in there 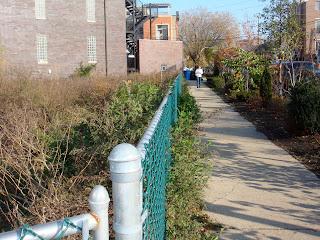 The owner might appreciate the opportunity to share his underutilized resource with a few neighbors in exchange for our work. Urban sharecroppers if you will. Given how much effort he put into the parkways, it's clear that he's interested in plants. Maybe we can persuade him.

Partly, I'm trying to avoid this, which in theory sounds all green and happy but is definitely not for the impatient gardener (I should have a t-shirt). Bruce can tell that story better than I, since he's been in the middle of the process to create a community garden on city land for, let's see, a couple long years maybe, with nothing planted yet.

He was a nice guy, the owner. I hope I run into him again. 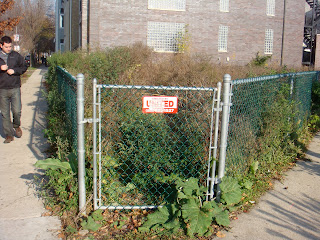 When I was out in Portland just a couple of months ago, every block had an inground garden or three that bordered the road. It seemed to be just part of the scenery there and the amazing thing was that it was not only condoned by the city but thoroughly supported through funding. Go figure.

What a great idea. Do try to find that fellow again very soon. Looking at that Chicago lot gives me flashbacks to my childhood and my Bohemian grandfathers fabulous garden in Lyons. Raspberries love Chicago soil.......

Hey mmpaints:
I'll bet your grandfather had a compost heap in Lyons too. I grew up with one in LaGrange Park, in the house my grandfather built.

We too had incredible raspberries.