We were delighted when Debbie shared seeds for culantro. 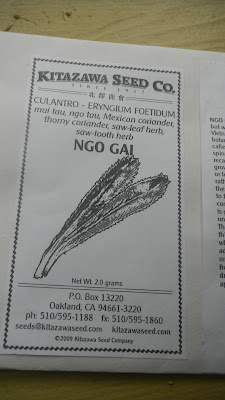 This herb has lots of monikers. The Kitazawa site says:


Also known as Mexican coriander, thorny coriander, spiny coriander, fitweed, saw-leaf or saw-tooth herb, recao and Tabasco parsley, this herb has a similar flavor to cilantro although much stronger. Each leaf grows from the plant base, rather than a stem, and the leaves are harvested by cutting the entire rosette at the base before the plant begins to flower. In mild climates, the plant can be considered a short-lived perennial, but more often it is grown as an annual.

In Puerto Rico it's called Recao

Purdue University has this on cultivation.


Although the plant grows well in full sun most commercial plantings occur in partially shaded moist locations. Shaded areas produce plants with larger and greener leaves that are more marketable because of their better appearance and higher pungent aroma. In a study on the effects of light intensity on growth and flowering of culantro, a significant delay in flowering and increased fresh weight of leaves were found in plants grown under 63% to 73% shade... Although culantro grows in a wide variety of soils, it does best in moist well drained sandy loams high in organic matter particularly under full light.

Culantro will be a fun addition to this year's herb selection. Apparently there's no end to the info available.


In Asia, culantro is most popular in Thailand, Malaysia, and Singapore, where it is commonly used with or instead of cilantro for soups, noodle dishes, and curries. The Vietnamese use it to wrap other foods. Candied culantro seeds were popular in eighteenth-century Britain as a tonic, a cough remedy, and an aphrodisiac.

We're going to start our culantro seeds in a portable microgarden just like we did the agretti last year...
The growing medium is damp peat and coir with a little perlite, to ensure wicking. 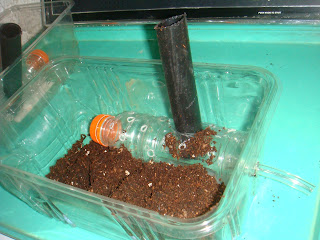 On go the agretti seeds,
followed by a gentle tucking in + plastic greenhouse 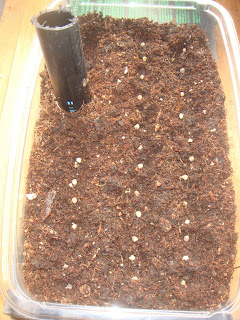 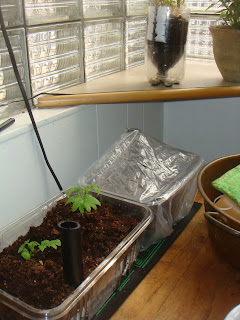