Yesterday I planted the two dwarf tomatoes Debbie gave us during our seed swap in early February. See them in their yogurt cup? 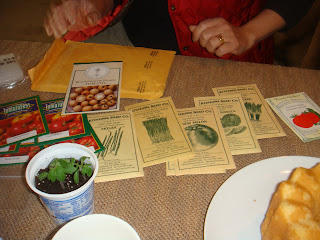 They thrived in the portable microgarden they've been growing in. 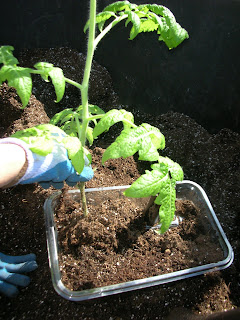 I planted them in these Eezy Grow sub-irrigated planters, which are shallower than the 5-gallon bucket SIPs. We'll see how they do.
It's early to be planting tomatoes in Chicago. They'll stay in the unheated greenhouse for now, out of the gusty winds that would snap them in half. 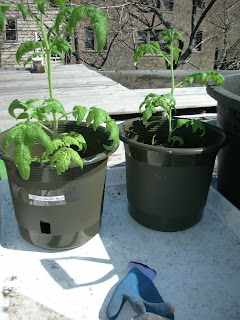 I can't wait to see what they produce, Rob. Have never grown a dwarf tomato.

I love the dwarf varieties especially since you can get fruit early. I started some Siberian tomatoes which should be good for a shorter growing season (I'm a southern gardener that has been transplanted to Belgium) and they are very compact seedlings. Also have had luck with Tumbling tom's and Early girl's. Hope they do well and start producing soon.
Are dwarf varieties just intended for smaller spaces (e.g containers) or do they also tend to be early producers?

Early fruit would make me very happy, Neeli. It sounds as though you've adapted nicely to your new location.

Maybe Debbie can answer your questions about dwarf varieties--whether they're specifically bred to be early producers.

I just started growing dwarf tomatoes as a solution to having some fresh tomatoes in the winter. I had heard that you might possibly be able to grow them in a South facing window. There are some varieties that are 55 days such as Yellow Canary, Early Wonder and Red Robin, others are 70-85 days.

I had to put our dwarf tomato plants under the grow lights because our new kitten liked eating our tomato seedlings and I am now getting tomatoes. I'll share some pic on GRG.