I took advantage of the unseasonably hot and sunny day in Chicago yesterday to get my compost bin back on track. Because I'm composting on a roof, I chose a homemade compost bin design made from a 45 gallon trash can. I drilled holes in the sides to allow oxygen in and excess water to drain, then cut a flap in the bottom to extract the finished compost. 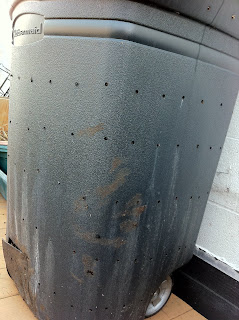 Home compost is usually generated using one of two basic methods of digestion: anaerobic (without oxygen) or aerobic (with oxygen). Both need moisture and will produce heat. There are three main drawbacks to anaerobic composting - it doesn't generate enough heat to kill pathogens and seeds, it smells, and it takes a lot longer than aerobic composting.
Aerobic digestion requires moisture balance & regular turnover to feed it with oxygen. I had not been doing either for a very long time, so my compost bin had become a soggy smelly mess of slowly breaking down food & garden scraps.
To kick start the bin I had to get rid of the moisture quickly. I didn't have space in the can for enough dry material to get to the ideal moisture level (something like a wrung-out sponge). Instead, I laid out a tarp on my neighbor's roof and spread out the compost in the sun. 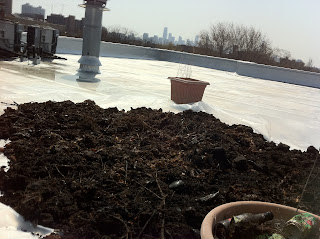 Within a few hours enough moisture had evaporated, and I shoveled it back in my bin. In all this took me about 30 minutes (not counting the several hours it sat in the sun).
Since I had not been achieving the high aerobic temperatures (131-155 degrees F), I chose not to use the compost in my planters yet. However, if I turn the compost every 3-4 days and use the lid to keep the rain from over-watering it, I'll have plenty of weed- and pathogen-free compost ready for a summer feeding.
Posted by brad at 9:30 PM

How do you use the compost, Brad? In your SIPs?

Hi, I haven't tried using it with SIPs yet. I remember reading that there may be problems using home compost in SIPs, though I don't remember exactly what. I need to research that a bit more.

For the past few years I've been using it to feed plants in other containers. I go though a decent amount that way, but I'm still making more compost than I can get through. At some point I'll run out of space in my bin - not sure what I'll do at that point. I thought about seeking out a community garden would make use of it. Maybe Bruce's?

Right--that's exactly what I was wondering. Whether you'd discovered a way to use it in SIPs. I don't think it wicks.

Bravo for making more compost than you can use. We are always willing to lighten your load...but am sure Bruce's community garden could use it more.